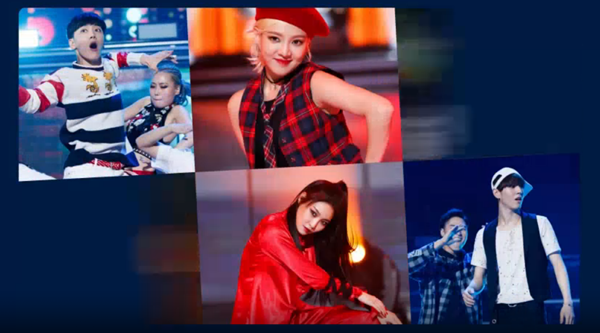 Kim Chungha was the first to perform, putting on a charismatic performance with the theme of Chinese martial arts, combining martial arts movements and waacking, her special talent. I.O.I’s Choi Yoojung joined Kim Chungha for this performance, and with it, she gained the votes of seven of the eight panel members.

Next to perform was Ten, who revealed that he created his final performance in thanks to “Hit the Stage.” He combined all of the performances he has done on “Hit the Stage” until now, for a fun, witty show. Ten also received seven of the judges’ votes.

Shownu then hit the stage with a concept of a tough guy. Monsta X’s Jooheon joined Shownu for a combination of rap and choreography, after which Shownu likewise received seven votes from the judges.

Performing fourth was Yugyeom, who took second place on the show last week. The GOT7 member told of his growth through dance in his performance, for which he brought on a large dance crew of 25. Yugyeom was the first dancer of the night to win all eight of the judges’ votes.

U-Kwon followed up Yugyeom with a performance inspired by the film “Now You See Me.” U-Kwon put on an impressive magic show, and even channeled Michael Jackson, winning seven judge votes.

Performing last was Girls’ Generation’s Hyoyeon, who put on a high energy locking performance. In complete confidence, she said her performance would be perfect to close the show. And true to her words, her fellow performers praised her throughout her performance and she received a standing ovation when she was done. The judges all loved the performance, giving her eight votes.

The top three of the six were Hyoyeon, Yugyeom, and Shownu. Shownu came in third, Hyoyeon in second, and Yugyeom in first place. Yugyeom, winning by a hair’s breadth of two points, said, “It’s a trophy I’ve won with my dancers, and all I can say is thank you.”

Meanwhile, a second season of “Hit the Stage” is currently in discussion.

Watch the full episode of “Hit the Stage” here: