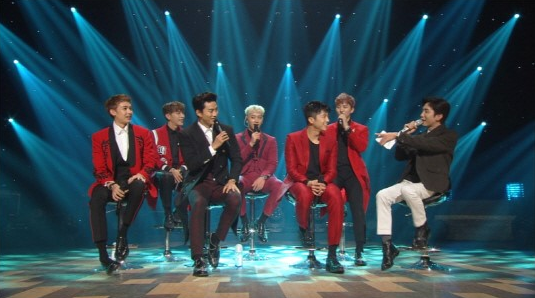 2PM Shares What They’d Like To Do Together Before Enlisting

2PM recently took part in an episode of the music show “Yoo Hee Yeol’s Sketchbook” for the first time in over three years.

During their interview on the show, the guys are asked which field they feel the most confident in. It’s reported that Nichkhun says sports while Wooyoung says variety shows, and Chansung jokes that he’s confident in “[writing] sexy lyrics.”

The members also talk about how their promotions for their sixth album are their last before they head to the army to fulfill their mandatory military service. According to reports, the guys say, “We haven’t yet all gone on a trip together even once,” and express their wish to travel somewhere together before they go to the army.

There has been no official news yet about when the members of 2PM each plan to enlist.

2PM recently made a comeback with their sixth album “Gentlemen’s Game,” which features the title track “Promise (I’ll Be).” Their performances and interview will air in the September 30 episode of “Yoo Hee Yeol’s Sketchbook.”

Support the artist by buying Gentlemen's Game from YesAsia
2PM
Yoo Hee Yeol's Sketchbook
How does this article make you feel?