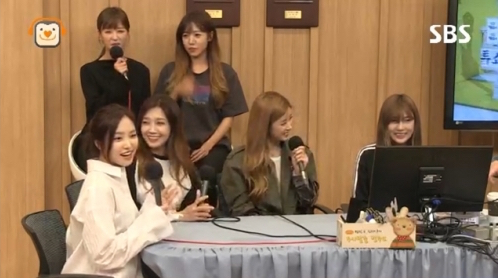 On September 28, the girls of Apink made a guest appearance on SBS’s PowerFM’s “2 O’Clock Escape Cultwo Show” in honor of making a long-awaited comeback with their newest title track, “Only One.”

When a listener sends in a comment about Hayoung that says they saw the idol fervently playing shooting games at a PC room (gaming center), the youngest member simply replies, “These days [I play] at the dorm instead.”

Jumping in, Jung Eunji reveals that Hayoung purchases new keyboards quite often, and recalls how once “there was definitely a keyboard that had just came, but then another one arrived.”

Hayoung defends her purchases and says, “The keyboard is important when gaming. I think I’ve bought about three new ones recently. Since they don’t work as well, I end up constantly changing them.”

Curious about her skill level, the DJs directly ask the idol herself. While she replies, “I’m still a little lacking,” Hayoung follows up by revealing she’s at the level of a colonel in a specific game, just below the level of a general.

Support the artist by buying Apink - Pink Revolution from YesAsia

Apink
Cultwo Show
Hayoung
How does this article make you feel?