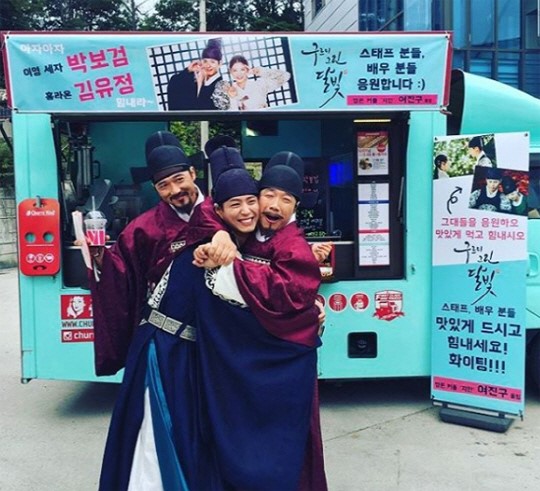 The never-ending amount of affection people seem to have for Park Bo Gum is inevitable.

In an Instagram post made by a food truck company on September 29, the actor’s “Moonlight Drawn By Clouds” co-star Park Chul Min lovingly gives him a big hug while smiling widely for the camera. Another co-star, Park Joong Hyun, also joins them, sporting a more subdued smile as well.

According to the caption, Park Bo Gum was originally posing alone when the other two actors came and affectionately surprised him.

The food truck itself is actually a gift of support for both the actor as well as Kim Yoo Jung from their good friend, Yeo Jin Goo.

Park Bo Gum personally took to Twitter on this day to thank him and relays that he was energized by the thoughtful gesture.

If you haven’t yet, watch (or re-watch) why so many people can’t help but fall for Park Bo Gum starting with the first episode of KBS2’s “Moonlight Drawn By Clouds” below!