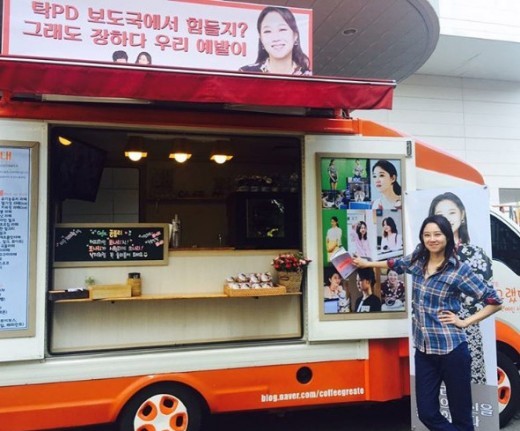 Cha Tae Hyun shows his support for actress Gong Hyo Jin, his past co-star in “Producer,” with a generous gift to the set of her latest drama “Don’t Dare to Dream (Jealousy Incarnate).

On October 3, the snack truck company uploaded photos of Gong Hyo Jin and the truck, sharing that Cha Tae Hyun “prepared [the truck] even before the drama premiered, but because our schedule kept getting backed up, we ended up coming now ?”

Cha Tae Hyun had the company prepare homemade cookies and coffee for the cast and crew. The banner on the coffee truck refers to Gong Hyo Jin and Cha Tae Hyun by their character names in “Producer” and reads, “PD Tak, it’s difficult in the newsroom, isn’t it? But I’m proud of you my Ye Bal.”

If you haven’t already, you can catch the two actor’s electric chemistry in “Producer” on Viki below!