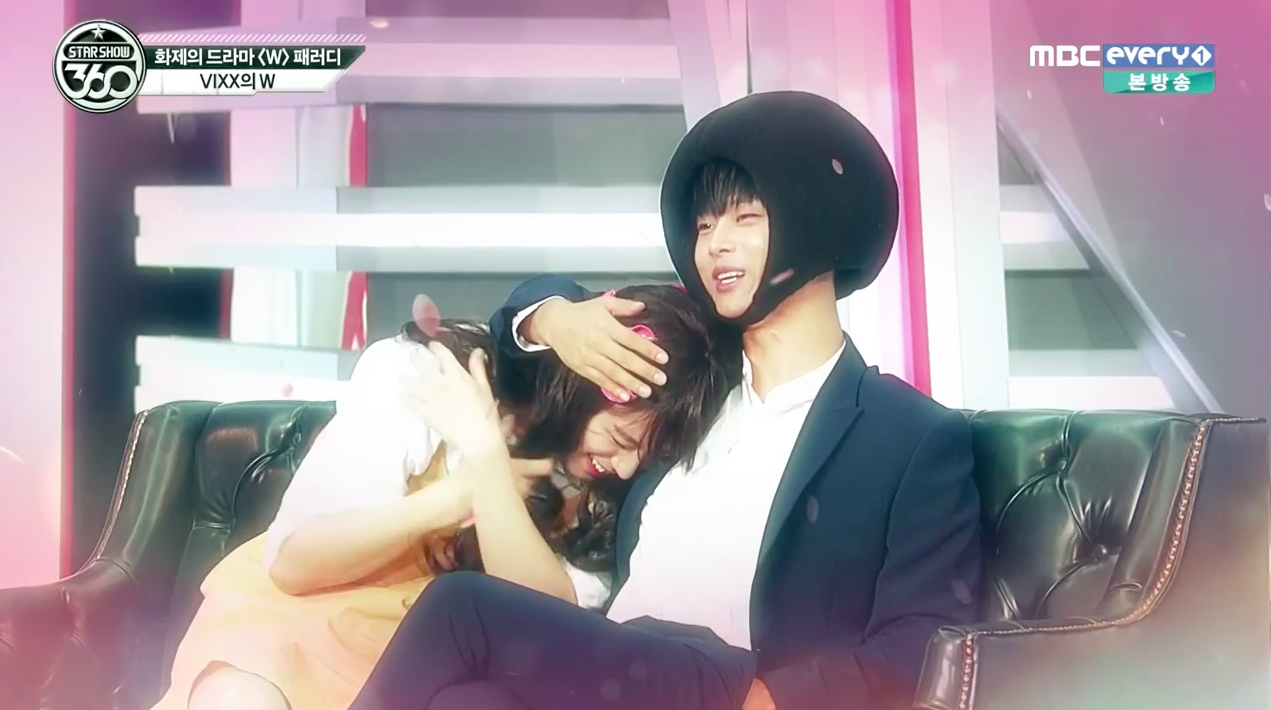 Watch: VIXX Transforms Into Your Favorite Characters From “W” For Hilarious Parody

In their skit, N plays the role of Kang Chul as “N Chul”” while Hongbin plays Oh Yeon Joo as “Lee Hong Joo.” Leo parodies the role of Oh Yeon Joo’s father the webtoon artist (as her older brother instead in the skit), Ken plays Kang Chul’s assistant Yoon So Hee, Ravi parodies the character of Kang Chul’s bodyguard Seo Do Yoon, and Hyuk plays the klutzy but lovable artist Park Soo Bong. 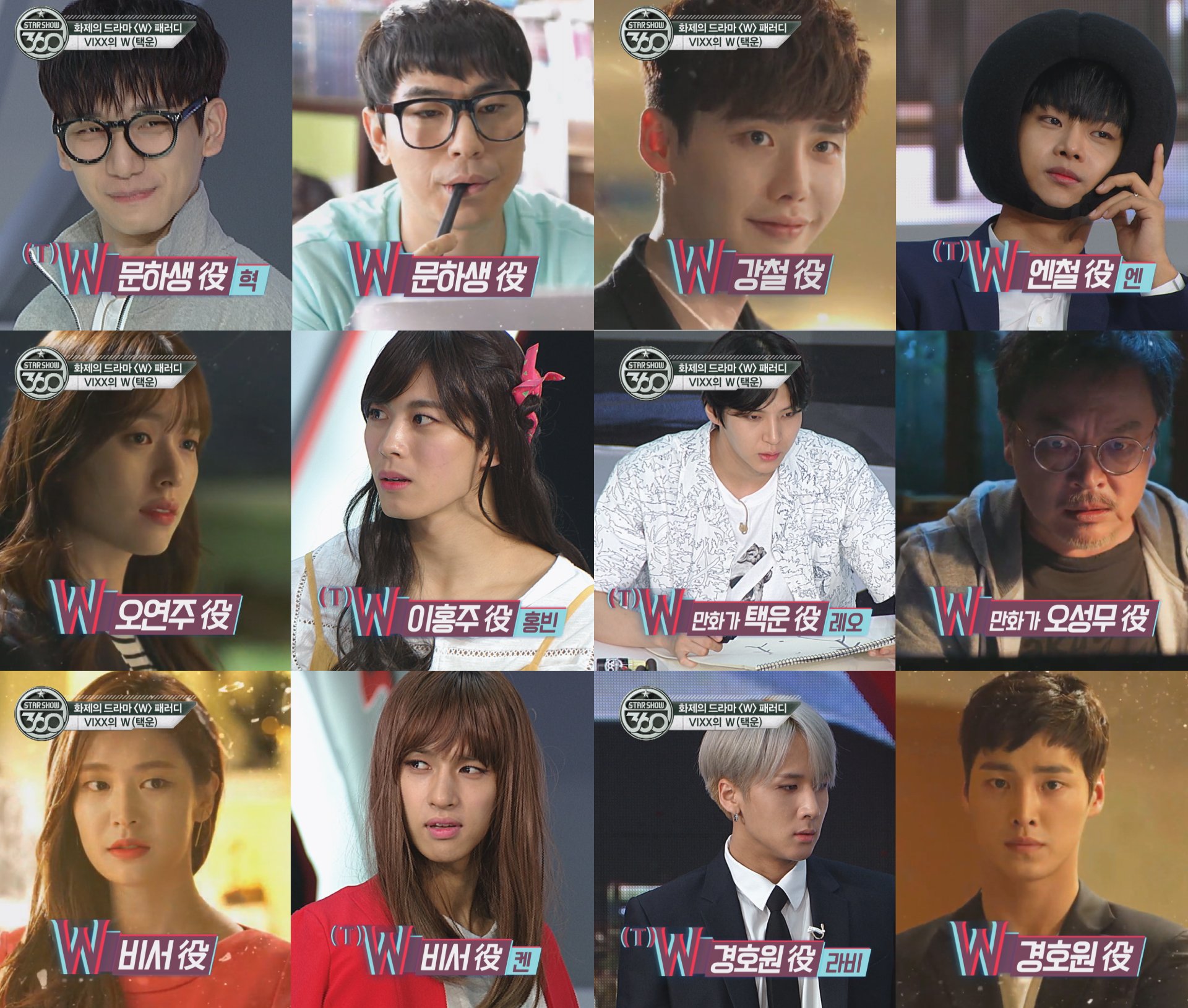 The skit includes plenty of classic moments from the show with a bit of a twist, such as N holding up a keyring as he delivers the line, “She’s the key to my life.” 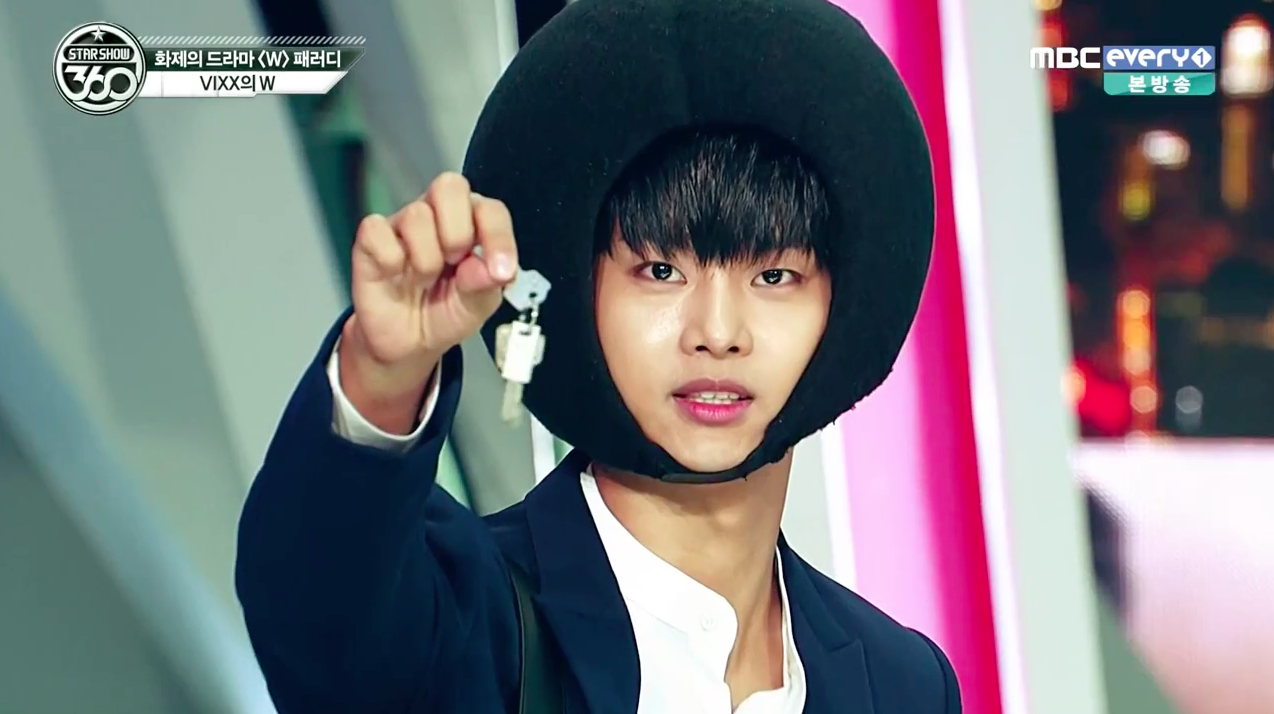 When Hongbin, in his impressive costume and makeup as “Lee Hong Joo,” confronts Leo about his attempts to kill off N Chul in his webtoon, Leo asserts his power as the artist by hilariously just writing down “Dead” on his sketchbook and holding it up to the camera, before scribbling out N Chul’s head. 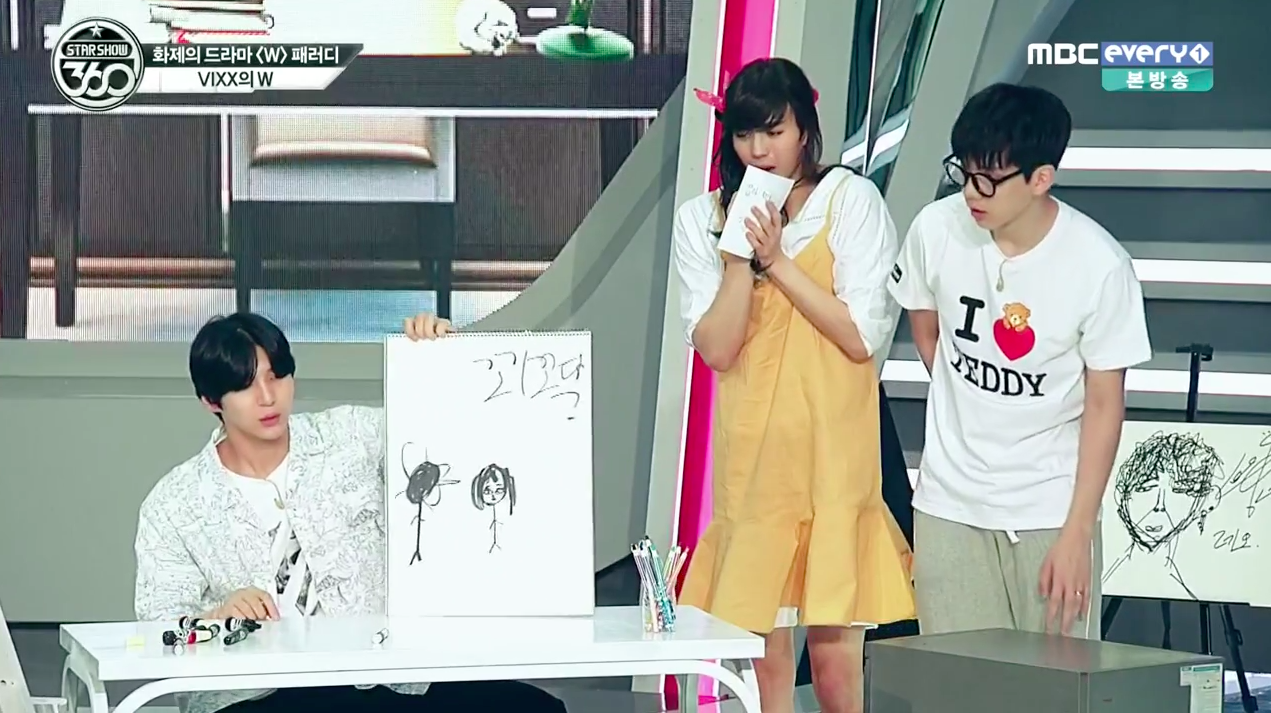 In another parody of a beloved moment from the show, Lee Hong Joo tries to make it back to the real world by hitting N Chul (and then Ken as Yoon So Hee) in the head, and ends up having to give him a hug. The pair later cuddle together on the couch. 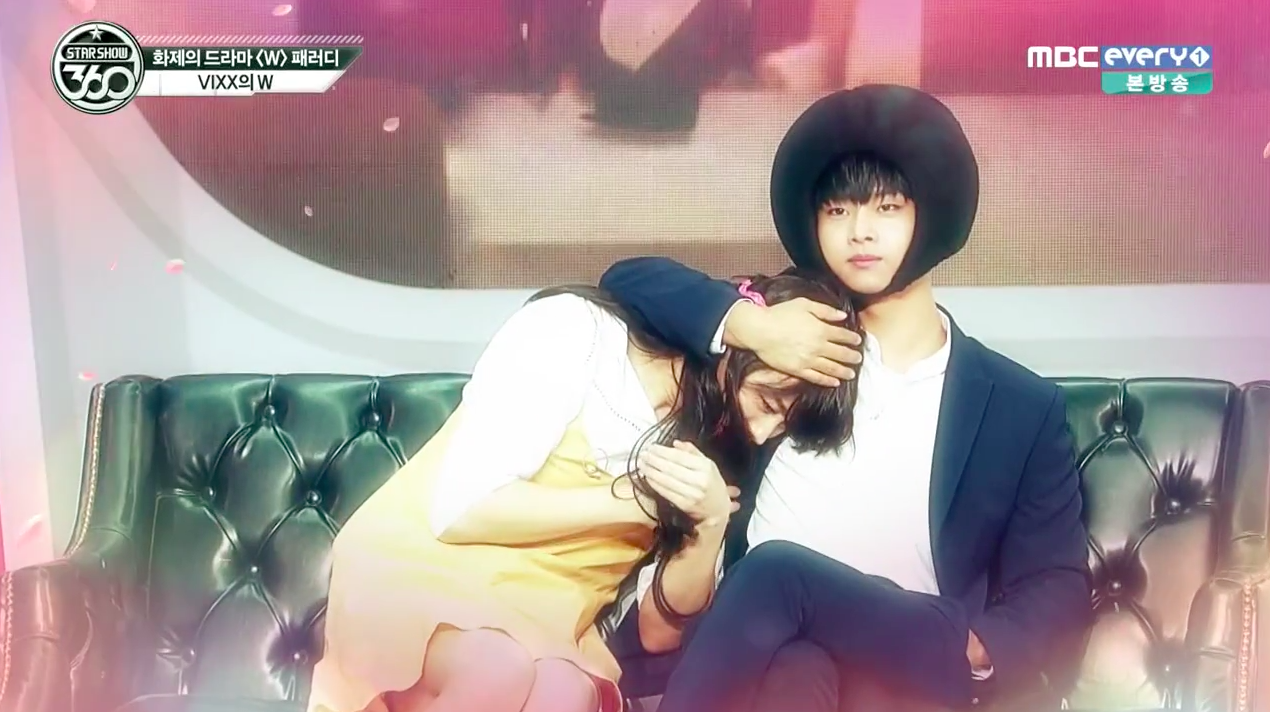 Once N Chul makes it out of the webtoon and into the real world, he sees Leo’s sketchbook and explodes in anger. “It’s because you drew me like this that I’m all black and circular, and my head’s so heavy?!” he yells, and grabs Leo by the collar.

Leo tells him that N Chul can’t kill him because it’s against his character, petting his head as he says, “You’re too righteous, and also all black and circular.” 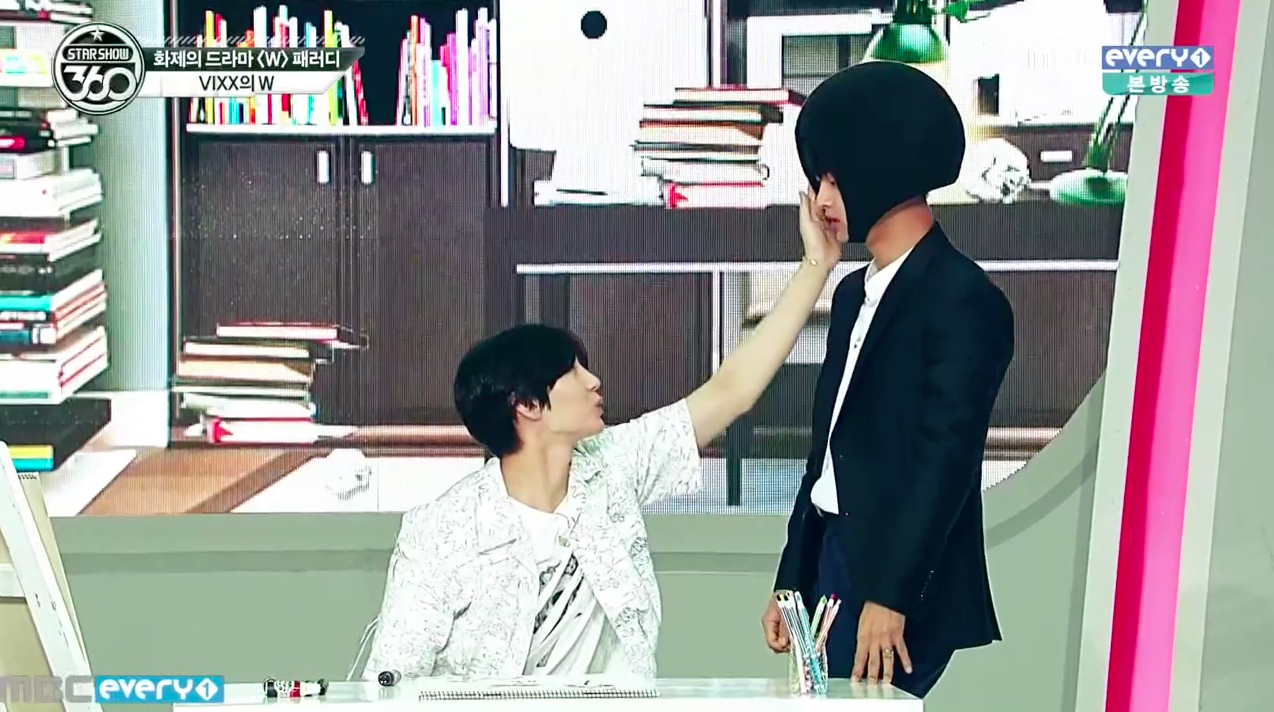 Lee Hong Joo then points out that since he’s in the real world, he can stop having a circular head, and lifts the hat off him. N Chul is thrilled with his transformation, and the pair share a hug. 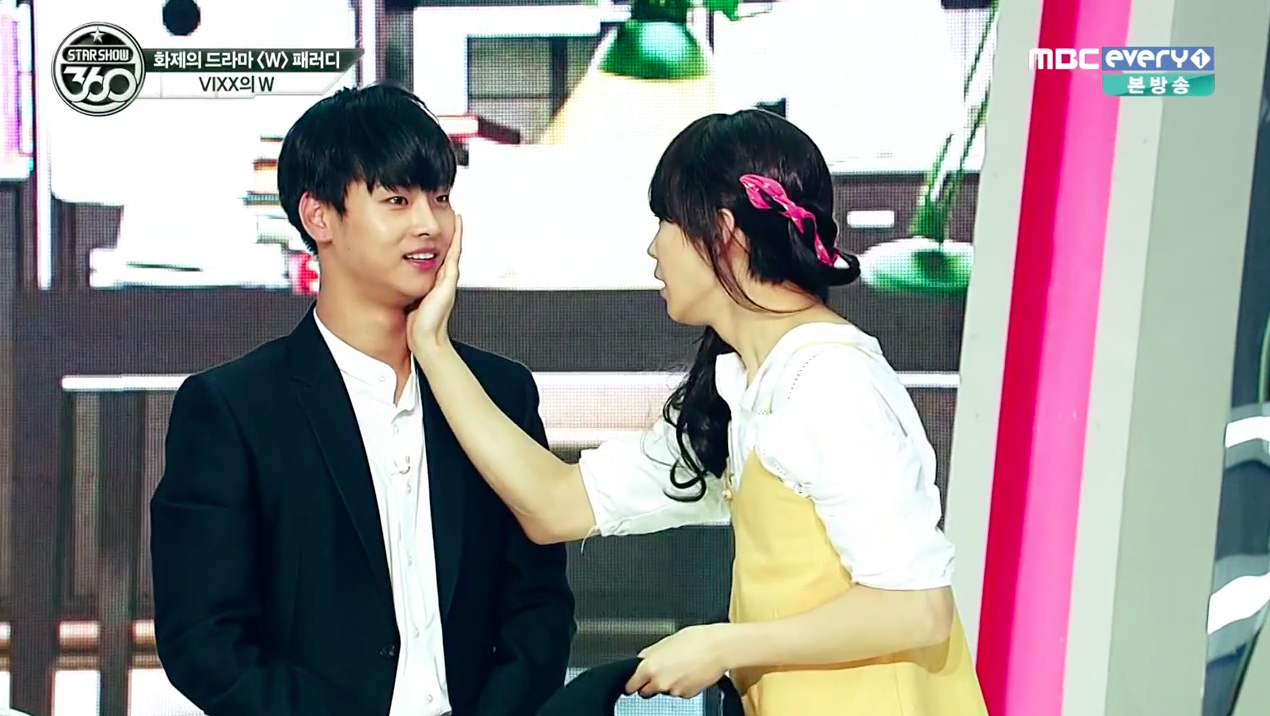 Once they call “cut” on the skit, the guys joke around about their costumes, with Hongbin calling Ken his unni, and Ravi throwing an arm around Ken as Ken jokes, “Want to date me?” They also tried to trick fans while they were in costume when Ravi uploaded a photo of his “girlfriend” to Instagram, which turned out to be Ken in his wig. 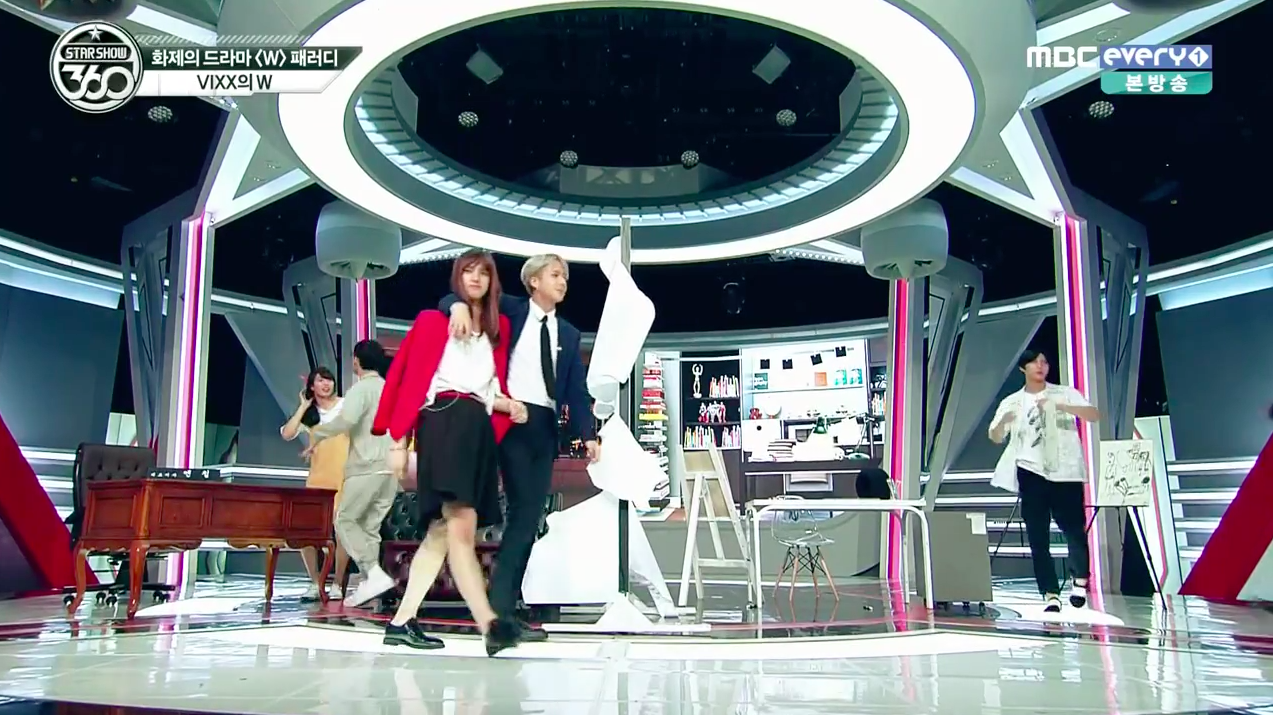 Watch two clips from the skit below, and check out October 3’s episode of “Star Show 360” for the whole parody!

Does their parody make you miss “W”? Watch it again starting with the first episode below!

VIXX
W
How does this article make you feel?