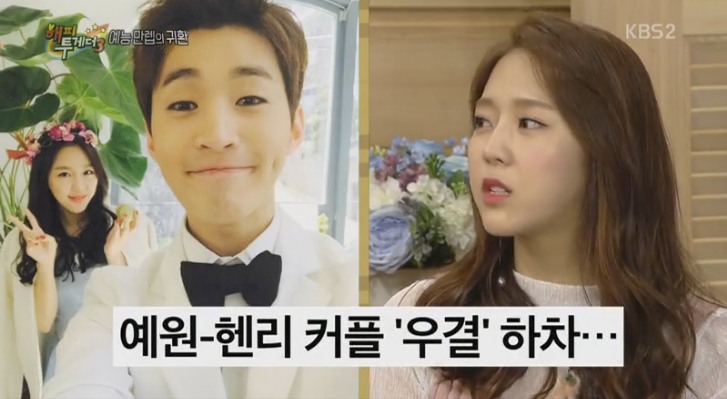 On October 6’s episode of “Happy Together,” Yewon makes her first appearance on a talk show after her scandal last year.

In the spring of 2015, Yewon was embroiled in controversy over a heated conversation she had on set with a senior actress, Lee Tae Im, in which Yewon used informal language. When a video leaked in March of their verbal clash, public opinion turned against Yewon.

At the time, Yewon was starring on the romance variety show “We Got Married” with Super Junior-M’s Henry, and the pair continued to remain on the show until June.

The hosts of “Happy Together” say to Yewon that they heard Henry comforted her a lot during the rough time. “Henry is a very positive person,” says Yewon. “He said to me, ‘There are a lot of comments about you, but it means you’re really popular now! You’re getting more comments about you than the president!'”

The hosts and guests laugh and joke that this sounds like Henry. Yoo Jae Suk says, “I also heard that Henry apologized to you!”

“Henry seemed to be saddened because I looked so disheartened,” explains Yewon. “We met up in a cafe once and took a photo together, and he told me that he thought that if he posted it on social media, there would be a lot of nice comments.”

Yewon says that when he posted it on social media, there were many mean comments instead, which the hosts and guests aren’t surprised by. “I was fine with it,” she says, “but Henry was worried that I would see them so he told me that he thought he should take it down.”

Yewon says he told her he felt bad because he had wanted to be a source of strength for her but had only made things worse, and Yewon says this just made her feel even more sorry towards him.

Watch more of Yewon in this week’s episode of “Happy Together” below!

Henry
Happy Together
Super Junior M
Yewon
How does this article make you feel?