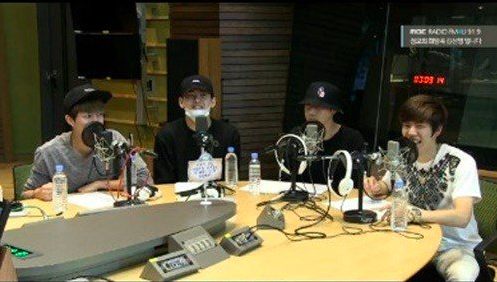 INFINITE Asked How They Feel About Overlapping Comebacks With SHINee

During the show, DJ Kim Shin Young said, “Your popularity this comeback has been like a ‘Typhoon’ [the Korean title of ‘The Eye’]. But now SHINee has made a comeback too.”

The INFINITE members responded, “Our comeback schedules overlapped. But we’re close to SHINee.”

When Kim Shin Young asked, “Even if you’re friends, aren’t you wary of each other?”, INFINITE said that they were personally huge fans of SHINee.

“To be honest, we already knew we would overlap,” they said. “Before the comeback, Minho came and talked to us about his album.” They also recorded a message for SHINee, saying, “Let’s not embarrass ourselves by saying how great the other’s songs are. Let’s just work hard together.”

Kim Shin Young's Hope Song at Noon
INFINITE
How does this article make you feel?