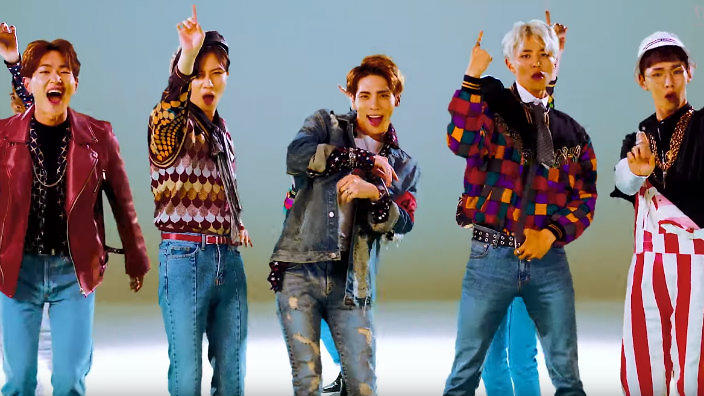 In the wake of SHINee’s long-awaited masterpiece of a comeback, we got to thinking about all the other times K-pop artists traveled back in time with other ’90s concepts. So, in no particular order, here are seven times K-pop artists rewound the clock for super creative concepts inspired by the decade.

Are we still in 2016 or did SHINee just magically transport us back into the ’90s? The group definitely went all out for their ’90s concept, and we can’t help but love every minute of it. Not only did they sell out copies of their album on cassette tapes (in 2016, mind you), but they’ve also given us a ’90s masterpiece — both visually and musically.

Topp Dogg still deserves all the awards for this one. Their 2014 title song “Annie” is a ’90s revival like no other, complete with the baggy pants and oversized jerseys so reminiscent of the era. Pair that with their highly intense choreography, and you’ve got a recipe for the perfect ’90s hit.

Girl groups should definitely take on the ’90s era more often. With “I’ll Be There,” SPICA tackles the ’90s with ripped boyfriend jeans, comfy white t-shirts, and an old school sound that’ll have you on your feet in seconds. Definitely an underrated gem.

Jay Park and Kirin’s collab on “City Breeze” is not only a feel-good track essential for any and all sunny car rides, but it just so happens to also be a flawless spin on the ’90s sound. Even the music video plays like a homemade VHS tape, spliced with iconic street dance shots and 2D-animated backdrops for closeups.

Rubber Soul instantly shook up the girl group scene when they debuted with “Life” in 2015. Instead of adopting the sugary bubblegum concepts many new girl groups go for, Rubber Soul took an alternative approach–debuting with a ’90s hip-hop style and sound.

Though this one may not look like your typical ’90s comeback, it definitely has the same feel. “My My” is true to Apink’s characteristically cute sound with a ’90s twist, and it’ll definitely have you wishing you were back in the decade, too.

BTOB’s “Wow” is another comeback that doesn’t immediately recall the ’90s upon first look. But the moment the song hits the speakers, you can bet that classic ’90s boyband nostalgia will instantly strike you right in the feels. It’s the catchy upbeat song you’ve always wanted, and you’ll definitely won’t be able to take it off repeat.