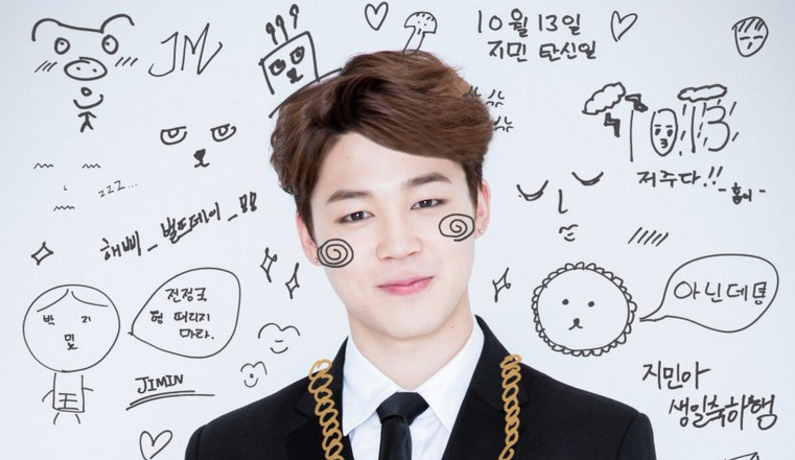 BTS Shows Their Love For Jimin With Birthday Spam On Twitter

It’s BTS member Jimin’s birthday, and despite their busy promotions schedule, his fellow members have kept up their fun Twitter birthday tradition!

BTS’s official Twitter uploaded a photo of Jimin on October 13 at midnight KST with his fellow members’ scribbles all over it. Their drawings and notes include birthday wishes, a “Hip Hop Feeling” necklace with a note that reads “birthday gift,” a drawing of Jimin saying, “Jeon Jungkook, don’t hit me,” drawn-on abs with the note “muscle man,” a sketch of the rice cakes that Jimin is often told he looks like, and lots more.

As per the group’s tradition, the guys then uploaded photos of the birthday boy to their official Twitter. Suga started it all off with a photo of Jimin pulling a funny face, writing as the caption, “Chimchim day, Chimchim day, cute Chimchim day.” He notes in the hashtags that they were doing pre-recording at the time, which was for their first comeback performance on Mnet’s “M!Countdown” on October 13.

Jin was up next, and he posted a photo of Jimin lying in bed during the shooting of their photos for “WINGS.” He writes, “Jimin, I really dote on you.” Rap Monster then shared a less-than-flattering picture of Jimin making a face with his head against a table, and wrote a caption that plays on the lyrics of “Blood Sweat & Tears” by inserting Jimin’s nicknames.

J-Hope shared a photo of Jimin crouching down with a toothbrush in his mouth, and writes, “Hip hop soldier Park Jimin while brushing his teeth.” He then shared another photo of himself with Jimin and explains, “I bumped into this celebrity while I was walking on the street. A picture of joy, congrats, celebrity.” He added in the hashtags for both photos, “I really like you.”

Rap Monster then tweeted out, “To be honest, I let you off easy in the name of justice,” a play on a line from “Sailor Moon,” and writes his name as “Sailor Mon.”

V shared a photo of Jimin looking incredibly young with a caption that says, “This person doesn’t look like he’s the same age as me.”

Jungkook next uploaded a photo of Jimin making another crazy face, with the caption, “Is this kind of thing what you guys want? Happy birthday, Jimin.” Rap Monster then scrawled “Hip Hop” on the photo and uploaded it in black and white with the caption, “Jimin’s photo with a revision that’s got feeling.”

Just before 5 a.m. KST, Jimin shared a video of himself and Jungkook in the van on the way home with the caption, “Thank you, I love you.” Jimin says in the clip, “Thank you so much to everyone who wished me a happy birthday today, and thanks so much to the fans who waited so late for us!” Jungkook then adds, “You’re the best!”

BTS is currently promoting their hit album “WINGS” and its title track “Blood Sweat & Tears,” which was released on October 10.