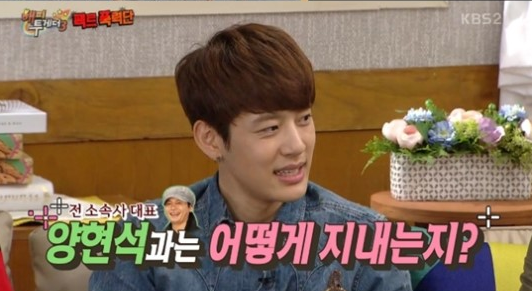 Singer Se7en, who recently made his long-awaited comeback with his new mini album “I Am Se7en,” reveals there is no bad blood between him and his former agency YG Entertainment.

Se7en guests on the October 13 episode of the KBS variety show “Happy Together” and talks about his relationship with YG, following his departure from the agency on December of 2015 when he officially announced a new start with his new company Eleven9.

When asked about his relationship with Yang Hyun Suk, he answers, “I text him every once in a while. I occasionally go to visit the agency as well. They’re supporting me.”

He addresses the rumors of discord between them, saying, “It is not true. There is absolutely nothing like that.”

Meanwhile, Se7en has already done his first performance for his new single “Give It To Me” on “M!Countdown.” Watch it here!

Happy Together
Se7en
Yang Hyun Suk
How does this article make you feel?