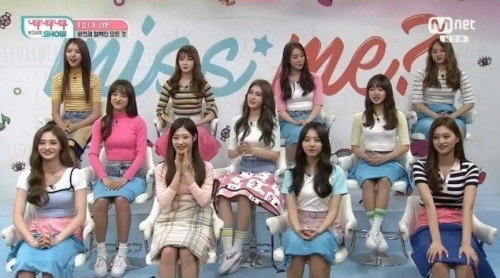 All 11 members of I.O.I come together to share stories about “Very Very Very,” while Park Jin Young continues to show his support for the girls!

On October 16, I.O.I held a live broadcast on V app entitled “I Miss You Very Very Very Much Show,” where the members await the midnight release of their mini-album “Miss Me?” and the music video of title track “Very Very Very.”

During the show, a video is played showing JYP Entertainment founder Park Jin Young, who was in charge of the song’s choreography, production, music video, and overall concept, explaining, “It’s a bright and lively dance song reminiscent of Wonder Girls’ ‘Tell Me.’ It captures the image of I.O.I as girls, rather than singers.”

Leader Im Na Young adds, “We were pressured because he’s another company’s producer, but when he saw us working hard he complimented us generously.”

Kim Chungha talks about how she thinks “Very Very Very” is more addicting than “Pick Me” and says, “You can’t not remember it. You can just sing along.”

Kim Sejeong states, “It’s definitely exciting that we’re all together after a long time. It would be nice if the song performs well, but I just want us to all be happy.” Kim Sejeong, Kang Mina, Jung Chaeyeon, and Yoo Yeonjung, are rejoining I.O.I for this track after focusing on promotions with their respective groups.

Jung Chaeyeon shares, “Our performance will broadcast live for the first time today.” She also performs a line from her tvN drama “Drinking Solo” which Zhou Jieqiong then parodies, charming their fans.

Meanwhile, Park Jin Young expresses his pride for the girls through an Instagram post shortly after the mini-album’s midnight release, where he shares a screenshot of I.O.I’s successful music chart performance with “Very Very Very” at number one and “Hold Up” at number three.

I.O.I
Park Jin Young
How does this article make you feel?