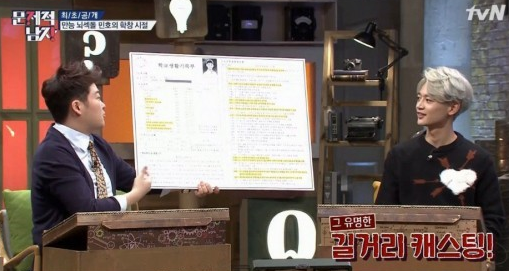 SHINee member Minho picked quite the interesting songs to sing at his audition for SM Entertainment!

On October 16, Minho is the guest on the tvN variety show “Problematic Men.” He reveals his friendship with Song Joong Ki as well as talk about how he came to join SM Entertainment.

He is asked, “Since when did you dream of being a singer?” and he answers, “I had given up on my dreams of becoming a soccer player and I was just going to school as a normal student when I was casted on the street.”

He continues, “As I was going to the audition, I thought to myself, ‘There’s no way I’ll make it.’ I didn’t prepare a song or a dance. And then when I finally got there, my mind went blank and I couldn’t remember a single song. I ended up singing the Korean national anthem. They asked me to sing one more song, so then I sang my school’s song. They took my picture and then later, I found out that I had passed the auditions.”

Meanwhile, SHINee recently won Inkigayo with their new track “1 Of 1.”

SHINee
Problematic Men
Minho
How does this article make you feel?