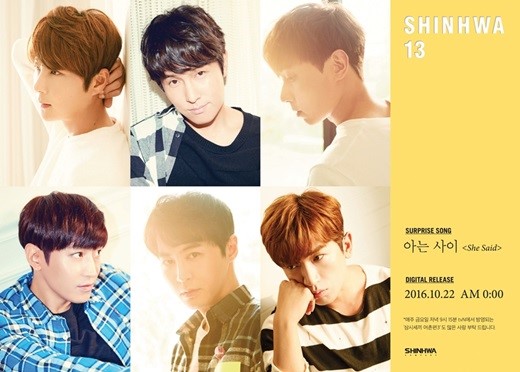 Shinhwa To Make A Sudden Comeback With Single “She Said”

Shinhwa is making a surprise return with a new single!

The group released the news of a comeback on October 19, and stated that their single will be released on October 22 on various online music charts.

Shinhwa’s track “She Said” is about ambiguous relationships where two friends are more than just friends. The track is a medium tempo track with a fall ambiance, and utilizes smooth instruments such as the guitar and piano. In the released teaser, the Shinhwa members give off a gentle vibe with bright and warm tones.

The group’s agency Shinhwa Company stated, “We decided to do a surprise release on October 22 for the fans who have been waiting for Shinhwa’s 13th studio album.”

*A previous version of this article incorrectly stated that it was a full studio album.