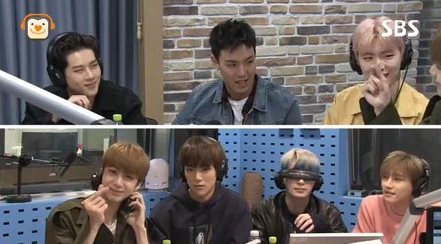 On this broadcast, Minhyuk and Hyungwon talk about their experiences modeling during fashion week. Hyungwon says, “It’s not what I regularly do and so it always feels new and nerve-wracking whenever I do it.” Minhyuk adds, “It was not the first time for Hyungwon. He’s done it a few times. It was the first for me. I didn’t know the runway well and so during rehearsal, I thought I’d watch the models and learn but I was in the back so I couldn’t see them.”

Minhyuk continues, “I walked the way I wanted to but when I saw the video, I saw I kind of walked cute like a penguin and thought, ‘This isn’t right.'”

Then Kim Chang Ryul asks them about their new album “The Clan Part 2. Guilty,” which was released earlier this month. The MC comments on how most people are unfortunately unable to listen to B-side tracks on their album. Minhyuk answers, “That’s why I think concerts are fun. There’s an advantage in that people come to the concert because they want to hear those songs.”

Kim Chang Ryul then asks if there are any fans that were especially memorable, to which I.M. answers, “It’s incredibly touching when fans come from faraway countries.” Minhyuk adds, “At fan signings, Chinese fans write out the pronunciation for us in Chinese. That’s touching.”

Support the artist by buying MONSTA X - The Clan 2.5 Part. 2 from YesAsia