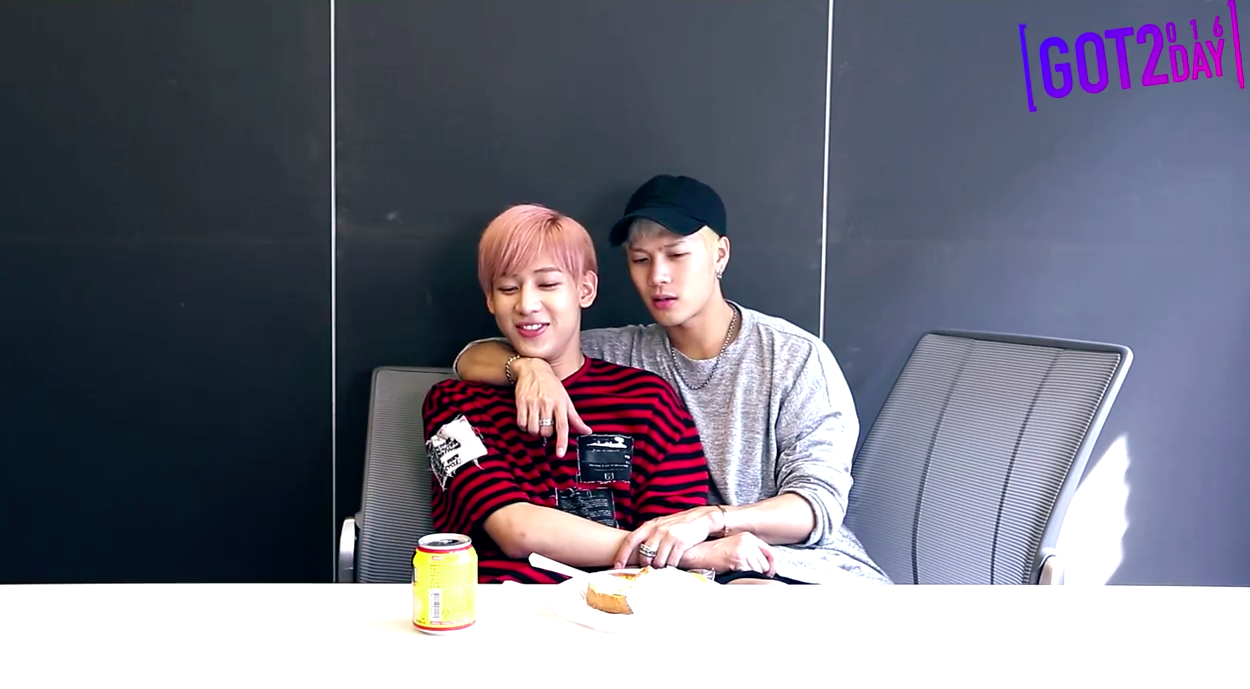 On the twelfth episode of “GOT2DAY 2016,” GOT7’s BamBam and Jackson sit down to chat and end up revealing both some complaints about each other as well as some sweet stories that prove their bromance.

“What does ‘Jackson’ mean to you?” Jackson asks BamBam at the beginning. BamBam replies, “I told you before. You’re like body hair,” as he feels the hair on his arm to demonstrate. Jackson protests that he wants to be something more special than that by saying, “When you wax, it all comes off!”

BamBam continues, “Like the cells all over my body that protect me! Your whole body needs body hair,” and then switches to English to say, “I need you in my life.” Jackson pretends to swoon a bit at that, and they both laugh.

Jackson then confesses that there’s something that he’s upset with BamBam about. “We always share a room, no matter where we go,” he says, as BamBam says he likes that. “As soon as we get into the hotel room, you have to unpack and organize your clothes and makeup and everything, right?” continues Jackson. “I have to be able to see my stuff! So why do you always turn off the light?!”

BamBam laughs and says he’s always tired and wants to rest, and so he turns on some music and checks out the night view (so he needs the lights off). Jackson entreats him to keep the lights on just a little bit. “I’m always like, ‘BamBam, let’s keep the lights on. I want to unpack.’ And you say, ‘Jackson come on, it’s for the mood!'”

He then says he’s fine with everything up to that point, but that on top of that, BamBam plays the same song for a whole month. BamBam cracks up and admits, “When I’m obsessed with a song, I just keep listening to it until I get tired of it.”

“Sometimes I’m upset with you about these things, but I’m grateful for you,” says Jackson later. “Come sit closer to me.” As they cuddle, he then tells a story of how one time when they were on their tour, BamBam had left a lobster roll next to him while he was sleeping. His imitation of BamBam saying to him at the time, “You didn’t eat breakfast, did you?” has them both cracking up.

BamBam also shares a story of how Jackson once surprised him with a gift of a new pair of shoes for his birthday. It makes them both freak out a bit over their feelings, and BamBam admits he bragged about how Jackson had bought the pair for him.

BamBam then shares something that’s been bugging him about Jackson, which is that he’s started to dress too much like Park Jin Young. “You used to dress really well!” he says.

Support the artist by buying GOT7 - Flight Log: Turbulence from YesAsia
GOT7
Jackson
BamBam
How does this article make you feel?