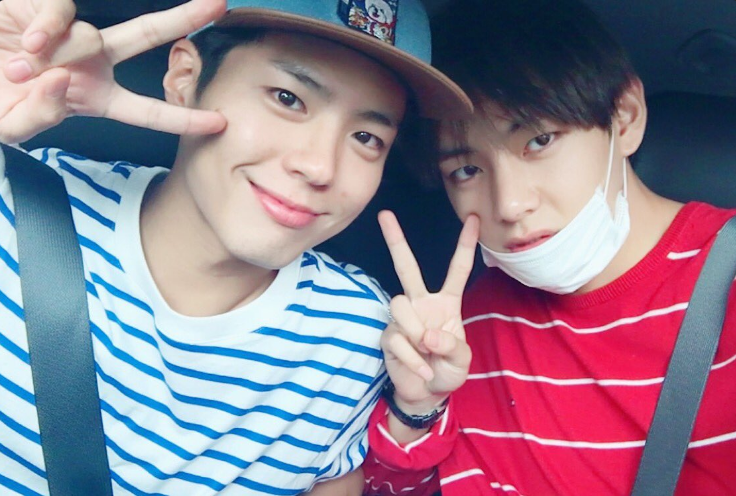 A fan first writes in to ask if V has talked to Park Bo Gum lately, and if he watched his drama “Moonlight Drawn by Clouds.”

“We talked yesterday,” says V. “We’ve been promoting the album, so I couldn’t watch it live, but I’ve seen highlights. And I contacted Park Bo Gum to tell him that he looks really cool in it.”

Suga then cracks the others up by calling Park Bo Gum by his name informally, and when they protest, he replies with a laugh, “What, we’re the same age!”

Host Park So Hyun asks V if Park Bo Gum has heard their new song “Blood Sweat & Tears” yet. V replies, “He told me he saw the music video. He said that each of us seems to be more sophisticated and cool now, and that we’ve become really sexy.”

“Who do you think is number one in Park Bo Gum’s heart?” asks Park So Hyun. “He can’t like all of you the same amount!” The others laugh and Suga says, “I think Park Bo Gum only knows V!”

Rap Monster replies, “No, he worried about me a lot when I got hurt.” Prior to the group’s comeback this month, Rap Monster took some time off from performing in order to avoid developing a stress fracture in his leg.

Suga says in amazement, “Wow, he’s so nice!” V confirms, “He recently worried a lot about Rap Monster, he even contacted me first to ask if he was okay.” The other guys then jokingly ask V if Park Bo Gum’s talked about them too.

In addition to appearing on the radio show, BTS also took home their second trophy for “Blood Sweat & Tears” on “M!Countdown” on October 20.

Support the artist by buying BTS – WINGS from YesAsia
Park Bo Gum
BTS
V
How does this article make you feel?