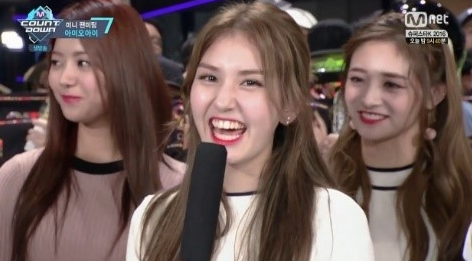 Music Show
by A. Choi

The project girl group made their highly anticipated return with all 11 members with their song “Very Very Very” from their second mini album “Miss Me?” The title track was produced by Park Jin Young as a gift for the group, especially since Jeon Somi is housed under JYP Entertainment. Their album also includes “Hold On,” which was produced by B1A4 member Jinyoung.

During the October 20 episode of “M!Countdown,” MC SHINee’s Key, asks Jeon Somi, “Between ‘Very Very Very’ by Park Jin Young and ‘Hold On’ by B1A4’s Jinyoung, which song do you like more?”

Jeon Somi is flustered and taken aback but is able to answer, “Honestly, I like ‘Very Very Very’ more,” to which Key laughingly responds, “That’s an unexpected answer.”