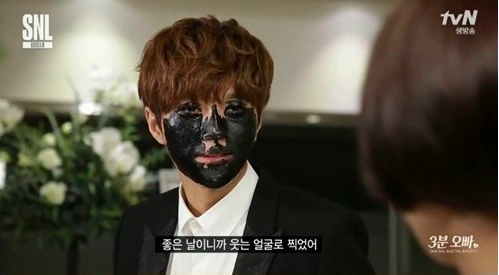 Watch: INFINITE Turns Into The 3-Minute Boyfriends You Thought You Wanted

As part of their infamous “3-minute” sketches, “SNL Korea” did the “3-Minute Boyfriend” version with the boys of INFINITE on their October 22 episode.

As one has come to expect from these sketches, INFINITE turns into a certain kind of boyfriend for three minutes with a surprise twist at the end.

Woohyun is marketed as the “Trustworthy Boyfriend” and asks his girlfriend to believe in him, only for him to turn out to be the priest of a bizarre religious cult.

Sunggyu is marketed as the “Genius Boyfriend” and helps his girlfriend with a difficult textbook problem only to get it wrong. As the skit goes on, it turns out that Sunggyu is actually parodying the South Korean variety show “The Genius,” a show where contestants play games for tokens called “garnets.”

L is packaged as the “Oppa Who Will Do Everything For You.” This turns out to mean that his face is doing all the work: his good looks get them free food at a restaurant, his secret surprise for her turns out to be just his handsomeness, and he pays for public transit (and, terrifyingly, a wedding!) using just his face.

Sungyeol, meanwhile, is the “Oppa That Only Looks At Me,” which needs no words of explanation. Sungjong also shows up at the end of Sungyeol’s skit with an over-the-top reference to lemon candy.