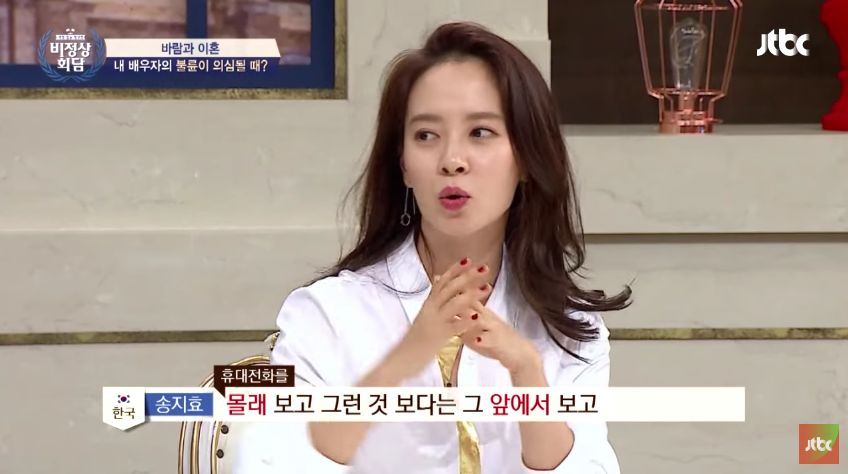 Watch: Song Ji Hyo Acts Out How She Would Deal With A Spouse Who Is Having An Affair

On the October 24 episode of “Abnormal Summit,” actress Song Ji Hyo appears as a guest.

In light of the plot of her upcoming JTBC drama “This Week, My Wife Is Having an Affair” (working title), the MCs ask Song Ji Hyo how she would deal with suspicions of a spouse’s affair.

“So if I’m definitely suspicious and have a strong hunch but don’t have any real evidence, rather than digging through his things and conjecturing on my own, I would just straight up ask him,” Song Ji Hyo says.

Song Ji Hyo then acts out with Yoo Se Yoon how she would confront a husband who comes home late after being out with another woman.

“These days, I’m a bit suspicious, so give me your phone,” Song Ji Hyo says to Yoo Se Yoon. “I can look at it right?”

Yoo Se Yoon hesitates, and she asks, “You must not want to give it to me.”

“No no,” says Yoo Se Yoon, acting like he’s handing it over to her only to throw the (air) phone on the ground and smash it into bits.

Song Ji Hyo explains her reasoning behind asking for the phone upfront, saying, “Rather than looking at [his phone] behind his back, I think looking at the phone in front of him and talking about it is better.”

Do you agree with her approach to dealing with this type of situation?

Meanwhile, Song Ji Hyo’s upcoming comedic drama “This Week, My Wife Is Having an Affair” will air its first episode on October 28. You can watch previews for the drama here.

Song Ji Hyo
Abnormal Summit
How does this article make you feel?