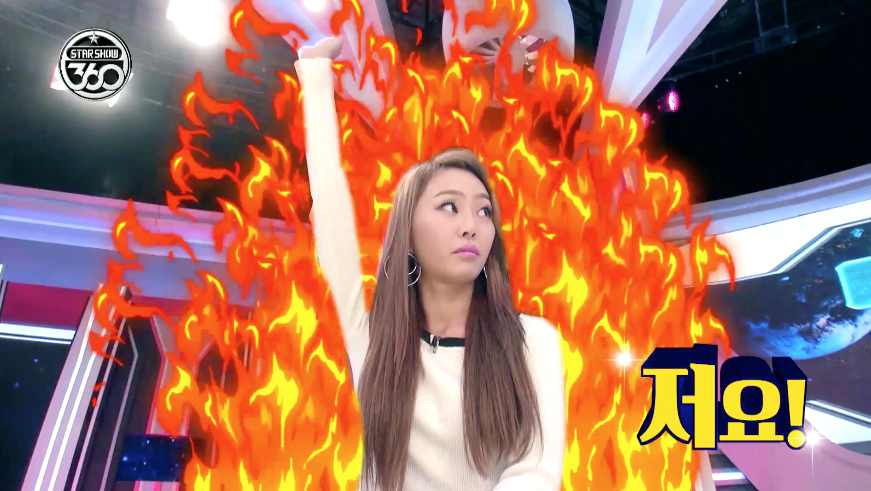 On the October 24 episode of “Star Show 360,” girl group SISTAR appears as guests.

During the show, the members discuss each other’s temperaments. “I think I have a lot of sadness,” Soyou says.

When asked by MC Tak Jae Hoon which of the members has a lot of anger, Hyorin raises her hand without hesitation.

“I don’t have any sadness, all my sadness has become anger,” Hyorin says.

Soyou reveals that she and Hyorin went to go get examined together, saying, “They said we both have a lot of anger, but Hyorin has an extreme amount [of anger] and not even an ounce of sadness.”

“They said my personality doesn’t experience any sadness,” Hyorin affirms. “And they also said I have the most anger out of all the patients they’ve seen.”

She continues, “Occasionally, I go to the emergency room in the early morning because I’m sick without a reason.”

“It’s because I can’t express it anywhere,” Hyorin says.

Dasom says, “That’s why [Hyorin] unni’s solution of choice is…” She doesn’t complete her sentence and instead makes a drinking motion with her hands.

Meanwhile, Hyorin dropped the music video for pre-release track “Love Like This” featuring rapper Dok2 on October 26 at midnight KST. Her new album will be released on November 8.

Hyolyn
SISTAR
Star Show 360
How does this article make you feel?