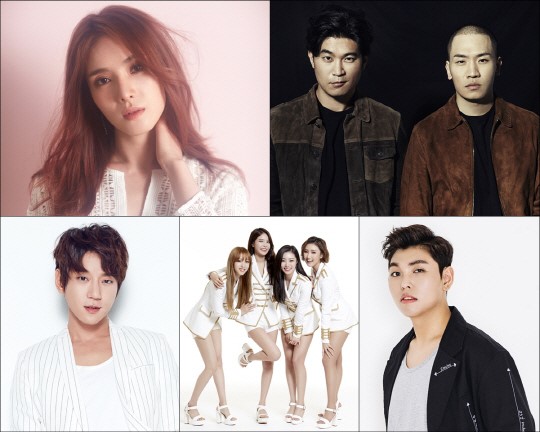 After announcing some fantastic performers in their first and second lineup, the 2016 Asia Artist Awards has revealed some more!

Gummy has been active in both concerts and TV appearances in 2016, but also found major chart success with her OSTs for “Descendants of the Sun” and “Moonlight Drawn By Clouds.”

Dynamic Duo, a nationwide name in hip-hop, has also been active in concerts and festivals throughout the year of 2016. They are also great chart-toppers and often feature on other artists’ tracks as well.

MAMAMOO is an idol group known for their powerful vocals and musical-like performances. This year they topped charts adn bagged their first music show wins with “You’re the Best,” the title track off their first studio album “Melting.”

Hwang Chi Yeol currently enjoys explosive popularity in China after appearing on the Chinese version of “I Am A Singer.” He gained fame with his rendition of BIGBANG’s “Bang Bang Bang” where he showed off his vocal, dance, and rap talent.

In 2016, Han Dong Geun released the single “Making A New Ending For This Story,” where it took No. 1 on various music charts. He has also proven his vocal talent on the MBC show “Duet Song Festival.”

The 2016 Asia Artist Awards will commemorate both the K-pop and K-dramas of the year. It will be held on November 16.