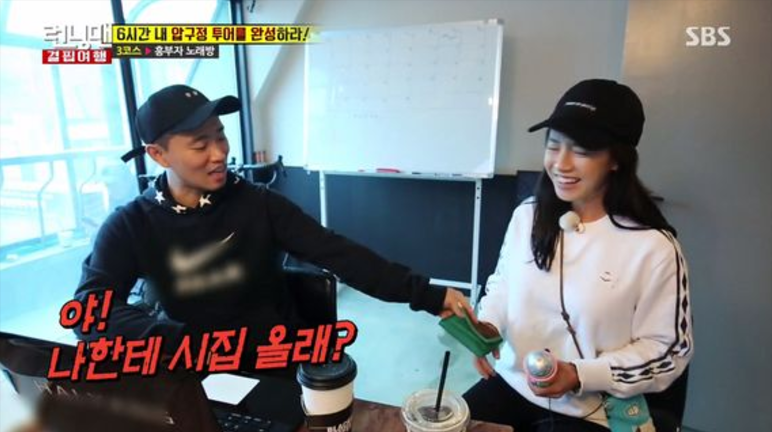 November 13 was the first episode of “Running Man” since Gary said goodbye the previous week. However, the “Running Man” members just happened to have missions this week that required Gary’s participation.

The members each sought Gary out and sang duet songs with him to complete missions. When Song Ji Hyo saw Gary again, she threw herself at him for a big hug, and said, “Gary, I’m really embarrassed right now… Last week I cried my eyes out, but…” Gary jumped in, saying, “You cried more when it was just you and me… (talking to the cameraman) When she met with me, she didn’t talk for about 20 minutes.” Song Ji Hyo jokingly explained, “I really cried a lot then. Even when I went home, I was still so mad I cussed him out over text.”

Gary said to Song Ji Hyo, in a final Monday Couple proposal, “Do you want to marry me?” Song Ji Hyo said, “Honestly, even though you left [last week], when I heard you were going to be back, I was nervous.” But, when Gary asked Song Ji Hyo if she wanted to do Monday Couple again, she immediately said no.