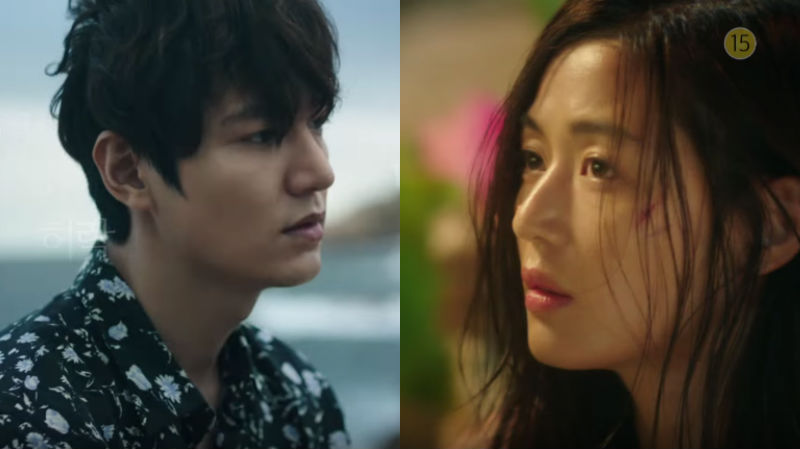 First Impressions: “The Legend Of The Blue Sea”

I can hardly contain myself. I’ll try to refrain from freaking out too much.

The first episode of the highly anticipated Wednesday-Thursday SBS drama “The Legend of the Blue Sea” FINALLY aired its first episode. Being a big fan of Lee Min Ho (and his perm on “Boys Over Flowers“) and being an even bigger fan of Jun Ji Hyun, to say that I was really looking forward to this one is an understatement. The teasers, the trailers, the stills — all I could do was wait in anticipation. I have to admit, I wasn’t completely sold on the whole mermaid theme, but I’m giving it a shot, hoping it’s like Disney’s “The Little Mermaid” or something.

Now let’s get to it. Curious to see what I thought about the first episode of “The Legend of the Blue Sea”? Keep reading to find out and I’ll try my best not to mention how attractive Lee Min Ho is.

It’s no secret that this drama was filmed overseas. Just from watching the trailers and seeing the stills on set, we could already see that the setting is pretty breathtaking. The light blue water proves to be the perfect scenery, especially with the two beautiful main leads in the midst of it. Even the the setting earlier on in the episode is beautiful. Look at the moonlight and how still the water is.

Most of Jun Ji Hyun in this first episode is her as a mermaid in the ocean and although I wasn’t too interested in her life as a mermaid, the production team did a good job of making the fantasy look real.

Also, was it just me or did you totally get the feels when the melodious song by Lyn came on in the background towards the end of the first episode? What’s an epic K-drama soundtrack without a song by Lyn, right?

First things first, Jun Ji Hyun is the star of this drama. I couldn’t stop admiring her beauty and how effortless her acting is. Yes, I’m a huge fan and I love her in this role. I really don’t think there are many actresses who could have been able to pull this character off. I mean, shoving spaghetti in your mouth and running into a glass window isn’t exactly a scenario that many female hallyu stars would be begging to do. I also know that people were a bit apprehensive about her ability to play a different character from her previous roles, but so far, she’s been proving to us that she can be versatile and not typecast.

Jun Ji Hyun plays a mermaid named Shim Cheong who magically (we don’t know how or why yet) becomes a human. She barely talks in the drama, so her character is still kind of a mystery. Her ability to act like she’s seeing everything on land for the first time and do this without having much dialogue is perfect. The lost look in her eyes and her clumsiness in riding the escalator were gold, but what more can we expect from the Jun Ji Hyun?

Lee Min Ho plays a professional conman by the name of Heo Jun Jae who spends most of his days trying to find illegal ways to make money. He also has this weird ability to hypnotize people (which I’ll get to later). Although Lee Min Ho is playing a deceptive character, his personality is pretty similar to his past ones: witty, charming, fashionable, and obviously downright handsome. However, despite the familiar character of Heo Jun Jae, I still found myself getting sucked into his sweet one-liners and charm. As for the two as a couple, the chemistry is totally there and I know people had their doubts about whether or not they would be able to pull it off. How could they not pull it off? These two are perfect. Really though, they are such naturals and I have a feeling the chemistry is only going to get more intense from here on out. The story begins sometime in the year 1598 when Shim Cheong meets Dam Ryung (Lee Min Ho), the town head, for the first time. She’s being held prisoner by the mean character portrayed by Sung Dong Il who wants to sell her, but Dam Ryung, captivated by her beauty (like all of us), saves her and sets her free. This is a stark contrast to the character he plays in the future, which is the clever con artist by the name of Heo Jun Jae. Fast forward to today, Shim Cheong somehow gets transformed into human form and shows up in Lee Min Ho’s hotel room eating his food, wearing his clothes, and well, kicking his butt.

She’s also wearing this fancy bracelet that she found at the bottom of the sea. We don’t know the significance of it yet — outside of sentimentality, as we know that Lee Min Ho was wearing it in the past as Dam Ryung — but Heo Jun Jae now he wants it so that he can sell it or do something with it in order to get money.

He ends up buying her fancy shoes and a dress and hypnotizes her into giving him the bracelet. Did I say hypnotizing? Yes, I did. I’m not sure why, but he has this ability to hypnotize people into believing what he says just by flicking his lighter. I’m thinking it has to do with the fact that Shin Cheong touched his hand when he set her free in the past, but that’s something to be potentially revealed in later episodes.

Anyways, once Jun Jae gets the bracelet from Shim Cheong, he decides to ditch her because he’s a cold-hearted conman. But just like a good male lead should, he starts to think about how he left Shim Cheong and starts to feel bad, which leads to this scene: This also happens to be the part where we get some serious butterflies.

Although the beginning of the story was necessary in order to see how these two were destined to cross paths, I was still anticipating them meeting on land. I couldn’t really get into the whole mermaid/town head aspect of the story, but it was short and didn’t drag on, which I appreciated. The plot is also pretty in line with what we saw in the trailers, but I still found myself getting captivated by how the two main leads stole the screen. Yes, the scenery, lighting, and sound made the drama, but the acting and charm from the two leads definitely brought the story to life; Lee Min Ho and Jun Ji Hyun have made me excited for the episodes to come.

Ok, so maybe I’m getting a little ahead of myself. I mean, it’s only been the first episode. But seriously, just based on the two main leads, I think this is going to be a good one. You’ll find yourself gaping at how gorgeous Jun Ji Hyun is and even for those of you who aren’t the biggest Lee Min Ho fans, I’m sure it’ll come with time — or am I just being biased? They fill up the screen and make this fantasy story pretty believable. All in all, it hasn’t disappointed me or let me down so far. Let’s hope this continues!

Catch the first episode of “The Legend of the Blue Sea” here:

Hey Soompiers, what did you think about the first episode of “The Legend of the Blue Sea”? Let me know in the comments below!

binahearts is a Soompi writer who can be most often seen singing her heart out at karaoke, walking her dog, or indulging in dessert. Her current obsessions include Song Joong Ki, BIGBANG, and “The K2” (mostly Ji Chang Wook). Make sure you follow binahearts on Instagram as she journeys through her latest Korean crazes!

Soompi Spotlight
Jun Ji Hyun
Lee Min Ho
The Legend of the Blue Sea
How does this article make you feel?