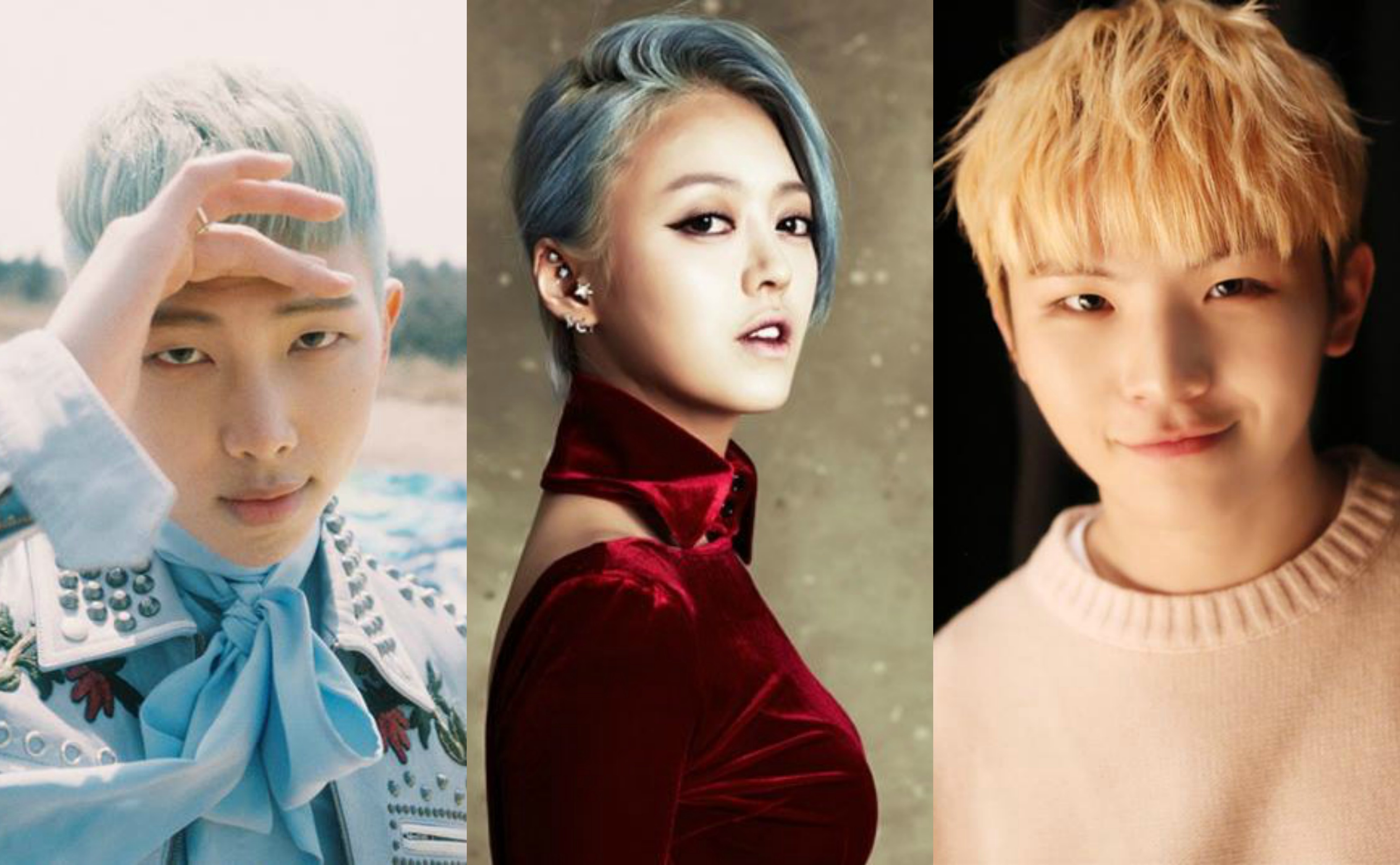 When it comes to song production and lyric making in K-pop, artists such as Dean, Gray, Zico, and Tablo are household names. There are also artists such as B.A.P’s Bang Yong Guk and BIGBANG’s G-Dragon, who are well known for writing and producing the songs for their respective groups.

But what about the K-pop artists who not only write songs for their own groups, but for also other idols? Here are 15 artists who’ve written or composed songs for artists outside of their groups.

Known for being half of MONSTA X’s rapper duo, Jooheon also doubles as a co-writer for Boyfriend’s “I Yah” and Starship Planet’s “Snow Candy,” and is also both a co-composer and co-writer for Mad Clown’s “Bad Blood.”

It’s a well-known fact that SHINee’s Jonghyun is the mastermind behind many of our favorite SHINee tracks. But he’s also had his hand in composing and writing tracks for other artists. He’s both a composer and writer for Lee Hi’s “Breathe,” Son Dam Bi’s “Red Candle,” Lim Kim’s “No More,” and IU’s “Gloomy Clock” — where he also lends his voice.

Take a listen to EXO’s “Playboy” below, where Jonghyun serves as both writer and co-composer.

Song production is no strange feat for CNBLUE’s Yonghwa and Jonghyun, considering the fact that they’re two of the band’s most active composers. Along with their lengthy CNBLUE composing credits, Yonghwa has composed and contributed lyrics to AOA’s “Love Is Only You” and (most notably) worked on Juniel’s single “Fool.”

Jonghyun has both co-composed and co-written Ailee’s “Fill Your Glass,” as well as soloist Nam Young Joo’s single “Fragile & Kind.”

TVXQ’s Changmin has been blowing us away for years with his truly sensational vocals, but did you know he’s also a super talented songwriter as well? He’s co-written lyrics for Taemin’s “Ace” and SHINee’s “Sleepless Night,” along with penning full lyrics to Kyuhyun’s solo, “My Thoughts, Your Memories.”

Adding yet another talent to her repertoire, MAMAMOO’s Moonbyul participated in writing the lyrics for artist Kye Bum Zu’s album track “Secret Love,” featuring rapper 8Dro. You’ll definitely love this one if you’re into laid back Korean R&B.

If you’ve ever gotten KARA’s “Step” stuck in your head all day, you have SPICA’s Kim Boa to thank for co-writing the lyrics. The power vocalist has contributed lyrics for countless SPICA songs, along with various songs by other artists. You can hear her lyrics in Eric Nam’s “Good For You” and “I’m Ok,” After School’s “Play Ur Love,” Rainbow’s “Kiss,” and ZIA’s “Bad Habit.”

iKON’s rappers Bobby and B.I. already had official composing and songwriting credits prior to their official debut — all thanks to their contributions to labelmate WINNER’s debut single, “Empty.” B.I. is credited as a co-composer for the single, while both B.I. and Bobby are credited as songwriters.

B.I. also doubles as a co-writer for BLACKPINK’s “Whistle.”

Aside from delivering skillful verses as part of BTS’s impressive rap line, Rap Monster also displays his musical versatility as a co-composer and co-writer for girl group GLAM’s songs “Party (XXO)” and “I Like That.” Check out the latter single below.

If you know anything about SEVENTEEN, you know that they pride themselves in being a self-producing idol group. But did you also know that their resident musical genius Woozi writes more than just SEVENTEEN’s songs? He’s credited as a lyricist for two songs off Ailee’s recent album “A New Empire,” one of which features Eric Nam.

Listen to the Ailee and Eric Nam duet “Feelin'” below, co-written by Woozi.

A truly underrated and overlooked songwriter, EXID’s rapper LE is the lyricist behind both of Troublemaker’s title comeback tracks “Troublemaker” and “Now.” As if her credits on those two hits weren’t enough, she also helped write Jewelry’s “Look at Me,” Secret’s “Talk That,” and Hyuna’s “French Kiss” — just to name a few.

LE serves as both a co-composer and co-writer for Boys’ Republic’s “Round” below.

BEAST’s Junhyung has countless credits as both composer and songwriter for several BEAST tracks, in addition to his own solo ones. But the list doesn’t stop there. He’s the co-writer for 4Minute’s “HuH,” EXID’s “Think About,” Apink’s “I Got You,” Jang Woo Hyuk’s “Time is Over,” and even C-CLOWN’s “Cold” and “Do You Remember.”

ZE:A’s Kevin plays a very active role in the group’s song production, but he also has credits as co-writer and co-composer of the B.A.P album track, “Take You There.”

Check out UP10TION’s catchy and smooth”Party2Nite” below.

Who are your favorite idol composers? Let us know in the comments below!