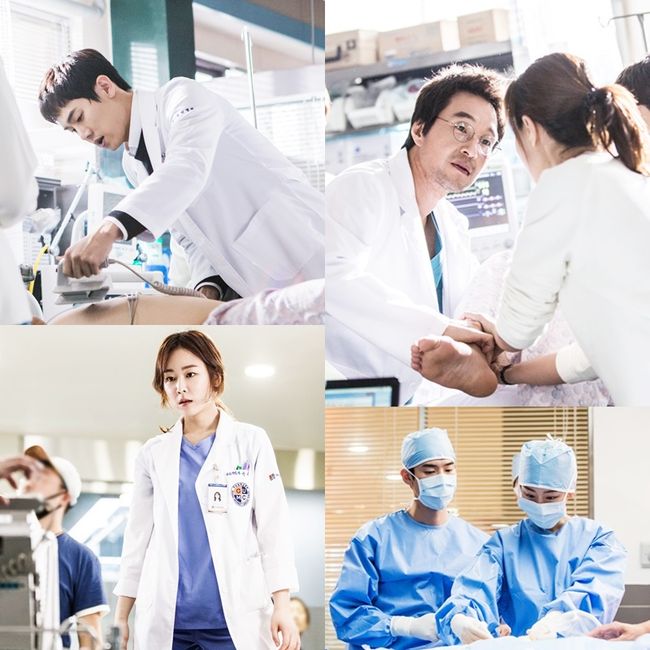 SBS’s new drama “Romantic Doctor Kim” has been garnering praise recently over its attention to detail!

The drama takes place in a hospital and tells the story of the staff who work there including the genius Teacher Kim (Han Suk Kyu) and the ambitious and passionate young doctors who work under him, Kang Dong Joo (Yoo Yeon Seok) and Yoon Seo Jung (Seo Hyun Jin).

Experts and regular viewers have been leaving comments on online forums about the realistic medical details in the drama, from little things like the order in which surgeons take off their masks to important procedures like CPR.

For example, in Episode 1, Yoo Yeon Seok and Seo Hyun Jin take turns performing CPR on an emergency patient, and Seo Hyun Jin was noted for the accuracy and expertise of her hand movements in the scene. Yoo Yeon Seok, on the other hand, was deliberately performing the technique wrong because of the context of the scene, and was praised for this attention to detail, especially as in Episodes 3 and 4 he reverted to the more realistic style.

A medical consultant, an emergency medicine specialist named Kang Jung Hee, is present at every filming to provide corrections to details. “It’s difficult to perform real CPR in a drama, but from the very beginning of the drama, the director wanted to show a more detailed CPR scene,” Kang Jung Hee said. “The actors received CPR training before filming. In real hospitals, doctors often use a stool or kneel by the patient when performing CPR, which can be difficult for actors to do, but they wanted to keep those realistic details.”

In Episode 1, Yoo Yeon Seok and Seo Hyun Jin perform an emergency surgery and every attention went into portraying this accurately as well. The two actors watched a video of the real surgery and practiced on a pillow before filming. Seo Hyun Jin even borrowed a dummy during a break in order to portray her part more accurately.

The production staff was full of praise for their actors, saying, “Han Suk Kyu is an amazing medical actor and he really seems like a teacher. Yoo Yeon Seok is very familiar with medical terms and even his actions feel like a real doctor’s. Seo Hyun Jin is quick to learn and understands the general meaning from a single phrase or word.”

The production company released a statement saying, “It is impossible to portray completely realistic medicine in a drama, but all our actors, directors, and staff are working to preserve as many details as possible.”

You can watch the latest episode of “Romantic Doctor Kim” below!