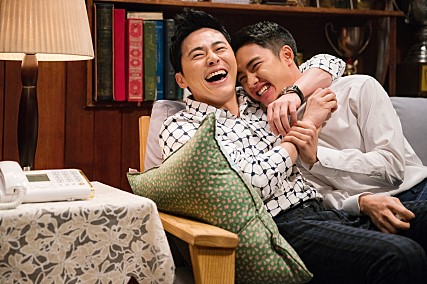 Jo Jung Suk praised his “Brother” co-star EXO’s D.O. as an intelligent actor who soaks everything up like a sponge.

In a recent interview, Jo Jung Suk talked about playing the role of Go Du Shik, a con artist who becomes a thorn in the side of his younger brother Go Du Young, played by D.O., whom he uses as an excuse to avoid jail time.

On working with D.O., the actor stated, “The first time I got to know him was in the movie “Kart,” I was thinking to myself that he was a pretty good actor when I saw him in the drama “I Remember You.” Though his appearance was brief, I thought he played his role as a psychopath really well.”

Jo Jung Suk continued to add, “I’m very happy to be able to work on “Brother” with him. He’s intelligent and is soaks everything up like a sponge. He’s able to express a wide range of emotions, and he has a lot of great qualities as an actor. I believe we were able to work well together to make each scene shine.”

Showing affection for his co-star, Jo Jung Suk said, “D.O. is an inherently kind and good man. Though he looks so young and boyish, he’s a charming guy with a manly side. He’s a great actor.”

D.O.
Jo Jung Suk
How does this article make you feel?