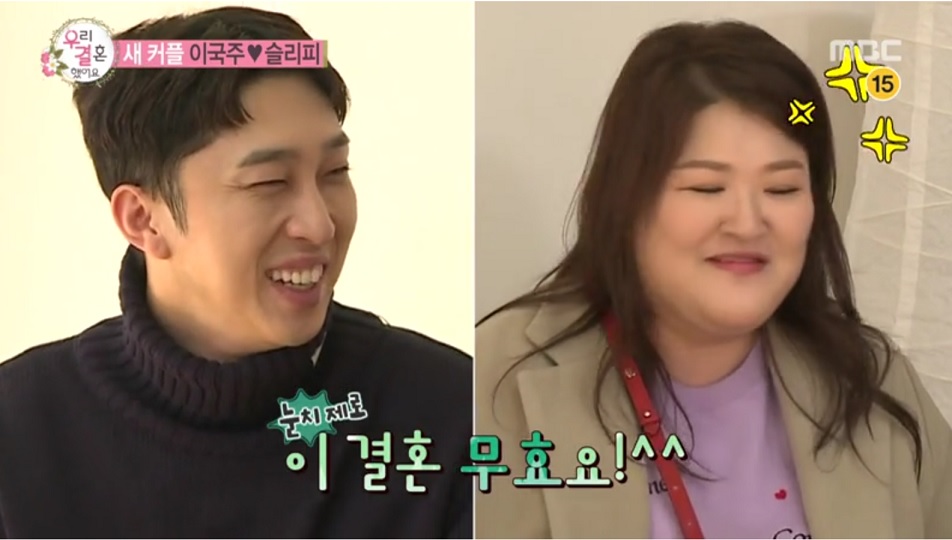 On the November 26 episode of “We Got Married,” the show’s newest couple Sleepy and Lee Guk Joo began their “married life.”

Before their first meeting as “newlyweds,” they both shared in their individual interviews how they felt about each other and their virtual marriage. Sleepy said that that Lee Guk Joo seemed to have hated him a lot at first, but that they match well with each other regardless. His new virtual wife appeared to agree with the second part of the statement, as she said that there’s no one else she can pair with for the show. Lee Guk Joo also explained that she’s keeping an open mind about things.

When the comedienne received her mission card, she expressed that she was both nervous and happy, as she was getting married earlier than expected. Sleepy also amusingly expressed his nervousness to his dog, Fury.

But things took an unexpected turn when Lee Guk Joo turned up at Sleepy’s house for the mission, only to find him living up to his stage name by sleeping. The rapper was barely startled awake when she rang the bell. To make things worse, Fury had torn up the mission card, expressing his “objection” to their marriage. 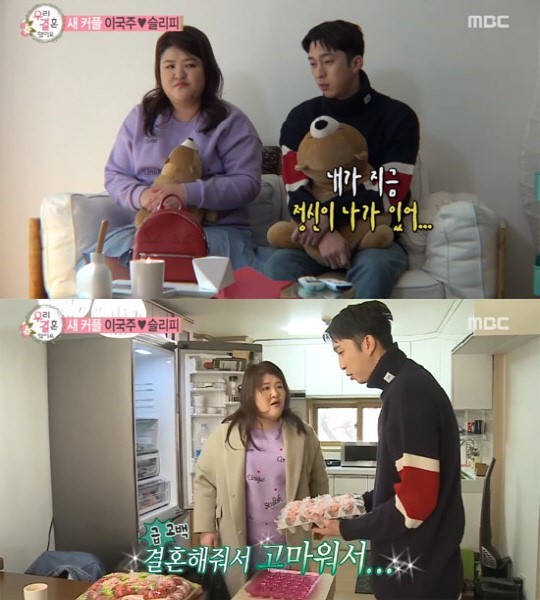 Out of the blue, Sleepy asked Lee Guk Joo for a glass of water. She grudgingly went to the fridge, but when she opened it, she was instantly greeted by not one, but two platters of meat shaped into flowers. Sleepy wanted to give her these gifts to thank his new “wife” for marrying him. He also promised to never let her go hungry.

His sincere confession was unfortunately rejected by Lee Guk Joo, who said, “You failed from the very start when you were still sleeping,” and “I’m a woman too, I want real flowers, not flowers made out of meat.”

In spite of this slightly rocky start, the pair had their first heartwarming moment just minutes later, when Sleepy stepped up behind her and gave her a back hug as they were putting the meat back into the fridge. They also shared a sweet first meal together, although they were extremely conscious of the other the entire time. 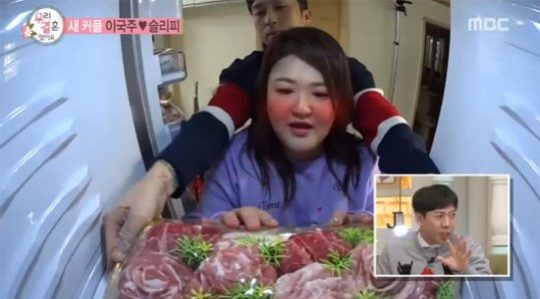 Watch this newest couple and the rest of the “We Got Married” episode below!

Sleepy
Lee Guk Joo
We Got Married
How does this article make you feel?