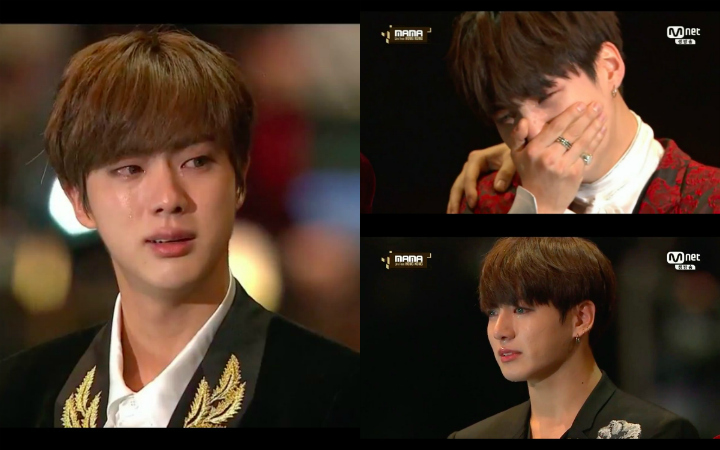 The 2016 Mnet Asian Music Awards (2016 MAMA) aired the evening of December 2 KST and featured some of the top artists from Korea and across Asia. Actors, producers, choreographers, and, of course, K-pop artists all descended on Hong Kong to attend the awards ceremony. With 23 main K-pop awards categories and a plethora of other awards to recognize talent from across Asia, MAMA goes all out to celebrate the best in Asian music.

BTS took home two awards from their third MAMA: Best Dance Performance Male Group and one of the largest awards (Daesang) of the evening, Artist of the Year. Following their first ever Daesang win for Album of the Year at Melon Music Awards, BTS solidified their popularity by taking home another huge award at MAMA.

With dance team leader J-Hope accepting their award for Best Dance Performance Male Group (and members V and Jin suspiciously absent until the end of the speech, perhaps in the bathroom?), the group was ecstatic to start the evening with a win.

But when it came to the Artist of the Year award, it seems that even the members couldn’t believe their win, with Rap Monster blinking back tears as he profusely thanked fans for supporting BTS from their debut. Two members notorious for holding back their tears, Jungkook and Suga, also broke down in tears as they stood on the stage alongside their group.

Congratulations to BTS and here’s to many more major awards in the future!

Check out their full tearful Artist of the Year win below:

All The Performances From 2016 MAMA’s Red Carpet

All The Winners Of The 2016 Mnet Asian Music Awards

BTS
2016 MAMA
2016 Mnet Asian Music Awards
How does this article make you feel?