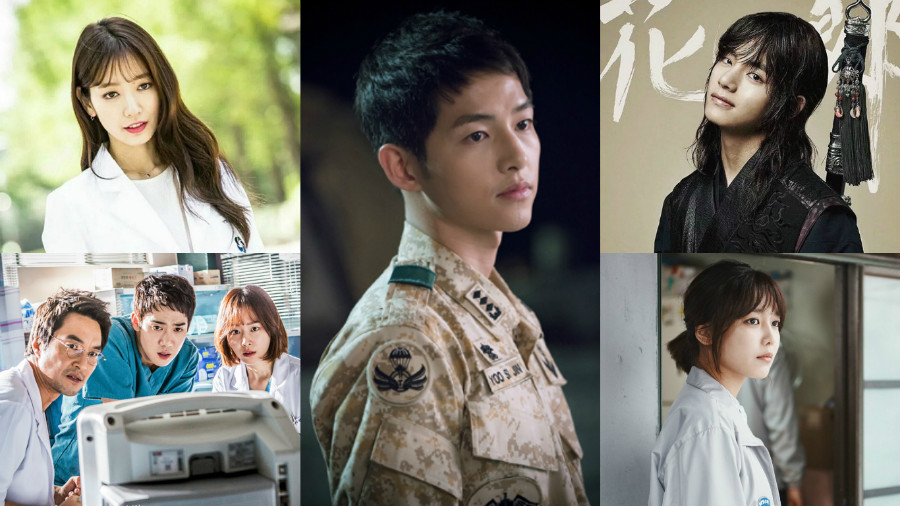 2016 was another year filled with many amazing Korean dramas! Although each drama was unique in its own right, there were also a lot of common threads that tied many of them together. Read on to see what trends dominated the K-drama industry this year!

No one will have trouble finding medical assistance in dramaland because the most popular profession for characters this year was — you guessed it, doctors! Popular characters like Kang Mo Yeon from the record-breaking “Descendants of the Sun” and Oh Yeon Joo from “W” were all doctors, and dramas like the aptly titled “Doctors” and “Romantic Doctor Kim” all revolved around the medical profession.

Why did we see so many people in white coats this year? Maybe it’s because their jobs are tied to a person’s life and death, the very things that make any plot emotionally intense and dramatically complex. It will be interesting to see if this doctors trend continues into 2017!

Trend 2: Fantasy is in the air

Of course we all know K-dramas are fictitious, but some dramas really defied reality this year by incorporating elements of fantasy, presenting viewers with some of the most unique, romantic, and mind-bending stories ever told. Time travel heightened the suspense and romance in dramas like “Signal” and “Scarlet Heart: Goryeo,” while the convergence of different worlds thrilled and puzzled viewers in “W” and “Dramaworld.” Supernatural powers, such as the ability to see into the future, also added a layer of comedy and intrigue to dramas like “Another Oh Hae Young,” and love between humans and fantastical creatures captured viewers’ hearts in “The Legend of the Blue Sea.” Which fantasy drama caught your attention this year?

Trend 3: The return of the veterans

2016 was a year of highly anticipated comebacks from veterans who had taken a long break from the industry. K-drama fans were excited to see Song Joong Ki, fresh out of the military, return with the romantic hit “Descendants of the Sun” alongside actress Song Hye Kyo, who was also making her television comeback after a three-year hiatus. Popular actress Han Hyo Joo made a grand return through “W” after a six-year hiatus from television, and top Korean actors Lee Min Ho and Jun Ji Hyun made their long-awaited comebacks together in “The Legend of the Blue Sea.”

Aside from the actors, we shouldn’t forget the people behind the camera! Many hit-making scriptwriters also presented their epic new works to viewers, such as Kim Eun Hee, who was not only the mastermind behind this year’s “Signal,” but also classic Korean thrillers like “Ghost” and “Sign.” Kim Eun Sook, the writer behind the popular 2013 romantic comedy “Heirs,” also finally returned, captivating viewers with another unforgettable love story in “Descendants of the Sun.”

Quite a few dramas this year featured plots borrowed from existing material. Some dramas were TV interpretations of popular webtoons, such as “Moonlight Drawn by Clouds,” “Cheese in the Trap,” and “The Man Living in Our House,” while others were inspired by traditional Korean folk tales like “The Legend of the Blue Sea.”

There were also remakes of popular dramas, such as “Scarlet Heart: Goryeo,” which was a remake of the hit Chinese drama “Scarlet Heart.” China also produced their own version of the classic Korean drama “My Love from the Stars,” called “My Amazing Boyfriend.” Are there any specific adaptations and remakes you hope to see next year?

Trend 5: Music to the ears

Any K-drama fan knows a drama can only truly impress if it has a soundtrack that is on par with its amazing plot and cast. This year was definitely filled with many unforgettable tracks from top singers, such as ballad goddess Gummy, who lent her beautiful voice to romantic tracks for “Descendants of the Sun” and “Moonlight Drawn by Clouds.” Powerhouse vocalists Davichi and Yoon Mi Rae also moved audiences with their voices in “Descendants of the Sun,” while popular K-pop idols showcased their musical talent through songs like “For You” from “Scarlet Heart: Goryeo” (EXO’s Chen, Baekhyun, Xiumin) and “Ring My Bell” from “Uncontrollably Fond” (Suzy).

Some actors also recorded a few tracks for their respective dramas, much to fans’ delight, such as Seo Ji Hyun from “Another Oh Hae Young,” who sang “What’s Love” alongside Yoo Seung Woo, and Park Bo Gum, who sang “My Person” for “Moonlight Drawn by Clouds.” Which drama OST was your earbug for 2016?

As with previous years, we saw a lot of idols cross over into acting this year. Some of them were old-timers such as Girls’ Generation members Sooyoung, YoonA, and Yuri, who all came back to the small screen in “Squad 38,” “The K2,” and “Neighborhood Hero” respectively. Girls’ Day members Minah and Hyeri also once again showcased their acting skills in the hilarious “Dear Fair Lady Kongshim” and the wildly popular “Reply 1988,” respectively, while two veteran idols-turned-actors also starred in two of the year’s most anticipated series: IU in “Scarlet Heart: Goryeo” and Suzy in “Uncontrollably Fond.”

There were also some idols who made their drama debut, like EXO’s Baekhyun in “Scarlet Heart: Goryeo,” SHINee’s Onew in “Descendants of the Sun,” and BTS’s V in “Hwarang.”

Did you spot any other trends in Korean dramas this year? Let us know in the comments below!

Soompi Spotlight
Cheese in the Trap
Reply 1988
Descendants of the Sun
neighborhood hero
Dramaworld
Signal
Uncontrollably Fond
Scarlet Heart: Goryeo
Hwarang
Doctors
Love in the Moonlight
Dear Fair Lady Kong Shim
W
Squad 38
The K2
Another Oh Hae Young
The Man Living In Our House
The Legend of the Blue Sea
Dr. Romantic
How does this article make you feel?