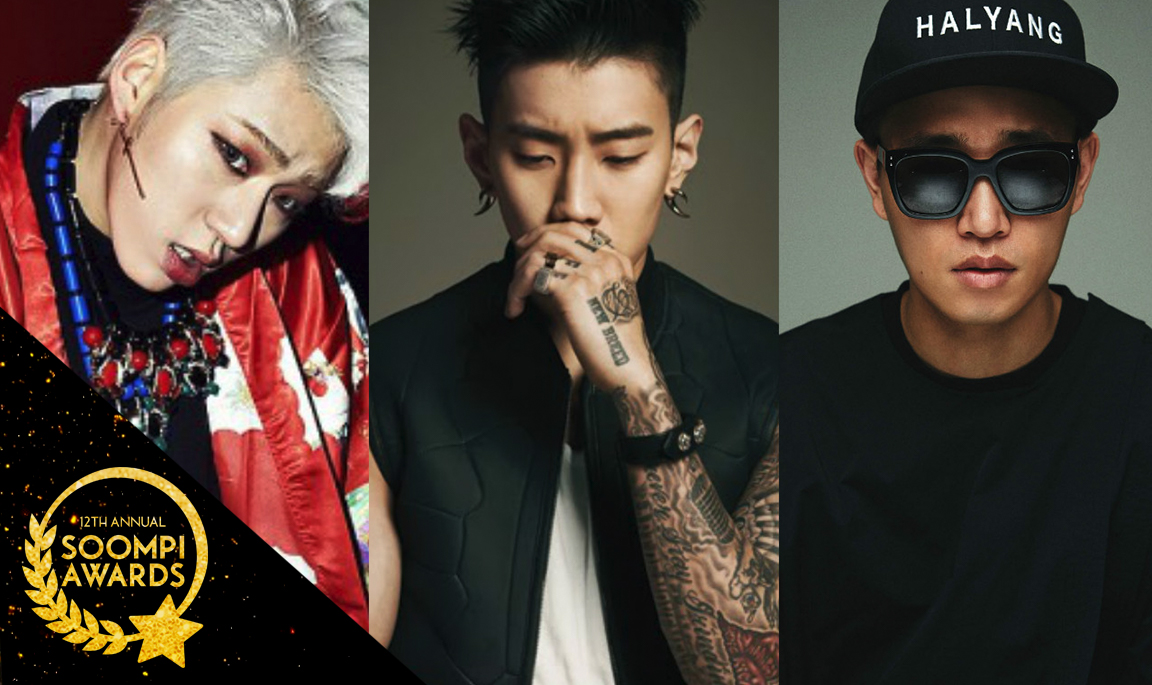 It’s that time of year again. Here are the nominees for Best Hip Hop and R&B Artist in the 12th Annual Soompi Awards.

Way back in January, Zico blessed us all with “Break Up 2 Make Up.” The smooth beats of “I Am You, You Are Me” had BBCs swooning, and he just released this epic tune featuring the sexy vocals of Dean and Crush. Zico exudes hip hop charisma.

Crush gifted fans with two EPs this year, “Interlude” and “Wonderlust.” He proved his international popularity by successfully completing his “Crush On You” tour, stopping in the U.S. and Europe. Crush’s music is perfect for the colder seasons, with his warm, charming voice melting away the cold.

“Lonely Night” featuring Gaeko stayed on the charts for 21 weeks. As well as releasing a song in Chinese, Gary recorded his first OST for the K-drama “Entertainer.” After his departure from “Running Man,” Gary will be gifting us with even more awesome music.

Yoon Mi Rae is amazingly talented. Check out her intense rapping in Ailee’s “Home.” Her stunning vocals shined this year when she featured on both the “Descendants of the Sun” and “The Legend of the Blue Sea” OSTs. There’s nothing she can’t master.

After her stint on “Unpretty Rapstar” in 2015, Heize has been releasing great song after great song. Her latest EP “And July” includes the velvety tune “Shut Up & Groove,” which features the brilliantly talented Dean.

Bobby continues to prove that he is worthy of his crown from “Show Me The Money 3.” iKON topped the music charts, both domestic and international, with “#WYD” earlier this year. The MOBB got everyone talking and “HOLUP!” definitely showcases Bobby’s pure talent.

Dok2 recently featured in Chancellor’s latest release “MURDA” and was nominated for Best Rap Performance at the 2016 Mnet Asian Music Awards. Illionaire signs in the air! Covered in gold chains, gold watches, and diamond bezel, Dok2 is the king of swag.

San E has popped up on so many songs in 2016. G.Soul’s “Smooth Operator” was the first awesome track he featured on. Then he delighted fans by rekindling his duo with After School’s Raina, producing the sweet “Sugar and Me.” Until San E’s new album drops, keep playing his golden tracks.

Jay Park is the definition of sexy. His latest album “Everything You Wanted” reached No. 4 on the Billboard World Albums chart, proving it was definitely what the fans wanted. As well as releasing his own album, he featured on Hyolin’s seductive track “One Step.”

Mino set fans’ hearts on fire with the release of “Body.” The steamy music video hit 1 million views in less than 24 hours. With WINNER making a comeback soon, Mino is hotter than ever.

Gray always creates crazy beats for so many artists; it would be ridiculous to not include his talent here. Gray participated on “Show Me The Money 5” as an AOMG representative and was featured in a lot of the AOMG releases of the year. Jay Park’s “Drive” and Elo’s “Day N Night” give a pretty good idea at how great Gray is.

AOMG chose well when signing Loco. His unique style is featured on a lot of their artists’ tracks this year; Jay Park’s “All I Wanna Do” isn’t complete without him. His OST “Say Yes” for “Scarlet Heart: Goryeo” was so gorgeous that hopefully 2017 brings more wonderful music from Loco.

As well as signing with YG’s sub-label The Black Label, Zion. T featured on numerous variety shows this year. After performing two songs — “Knock” and “Machine Gun” — on “Show Me The Money 5,” fans pleaded for them to be released officially, and Zion. T complied. He has one of the most unique voices around; hopefully 2017 marks the year he will release an album.

Beenzino finally dropped his first full album “12” this year. His colorful style and individuality always shine through. He reunited with Urban Zakapa for “Thursday Night” and collaborated with BoA. Also, his OST for “Entourage” is beyond incredible.

You can also check out the nominees for Best Hip Hop and R&B Artist here!