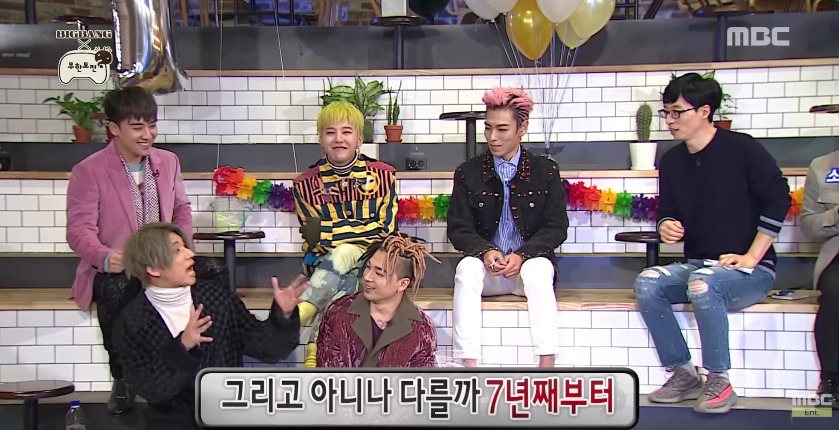 On the December 17 episode of MBC’s “Infinite Challenge,” BIGBANG pulled out all the stops and showed off their variety chops once more.

During the program, the cast members asked BIGBANG if they have any tips on how to overcome the infamous “seven-year-curse,” referring to how idol groups tend to lose members or disband all together after about seven years.

Taeyang truthfully revealed that even they started getting tired around the seventh year, and how there was even a time when the members had built up grudges but didn’t really talk them out.

Meanwhile, Daesung stated, “The reason we were able to surpass the ‘seven-year-curse’ is probably the income we have as BIGBANG…”

“Furthermore, around the seven-year mark, we embarked on our world tour. So even if we had grudges…,” Daesung hilariously remarked. He added that they instead came to the conclusion, “That’s right, we should work harder.”

On the other hand, Seungri commented, “The leader had a big role in how long we’ve lasted,” to G-Dragon’s embarrassment.

Watch the whole episode and all the insanely funny moments below!

BIGBANG
Infinite Challenge
How does this article make you feel?