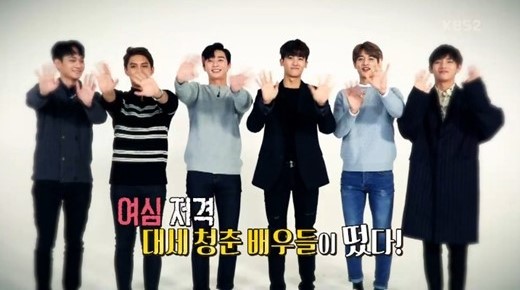 On the December 16 special preview episode of “Hwarang,” the six main actors (Park Seo Joon, ZE:A’s Park Hyung Sik, SHINee’s Minho, Do Ji Han, Jo Yoon Woo, and BTS’s V) gathered together to give a sneak peek of the drama. Various highlight clips were shown, after which the actors elaborated on what happened behind the scenes.

The special episode was pretty much a reaction video, as the boys ooh-ed and aah-ed over the action scenes, and cracked up during the romance scenes. But when a shower scene appeared, a collective scream of embarrassment rang around the set. In the scene, Go Ara accidentally walks in on the Hwarang boys as they are showering in the communal baths.

Do Ji Han said with a laugh, “We got closer after filming that scene.” Park Seo Joon also said that the staff had told him that they looked like they belonged in “The Legend of Tarzan.” 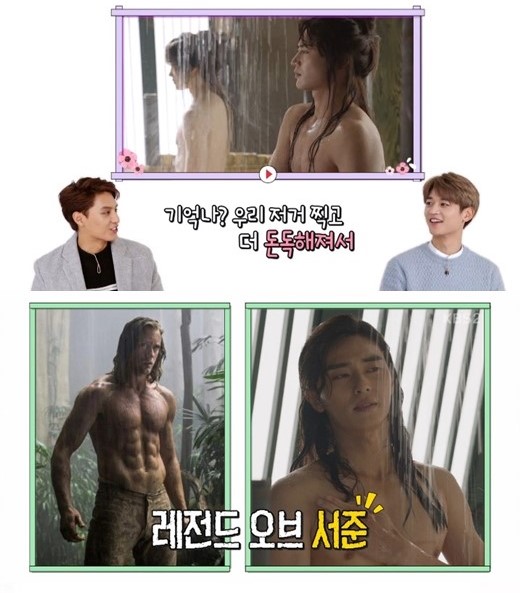 V (Kim Taehyung) then confessed, “No matter what, the nudity was a bit burdensome for me. But before the filming, everyone was working out.” Park Seo Joon slyly quipped, “It’s to make the viewers’ money worth it.”

Park Seo Joon
BTS
Hwarang
do ji han
V
How does this article make you feel?