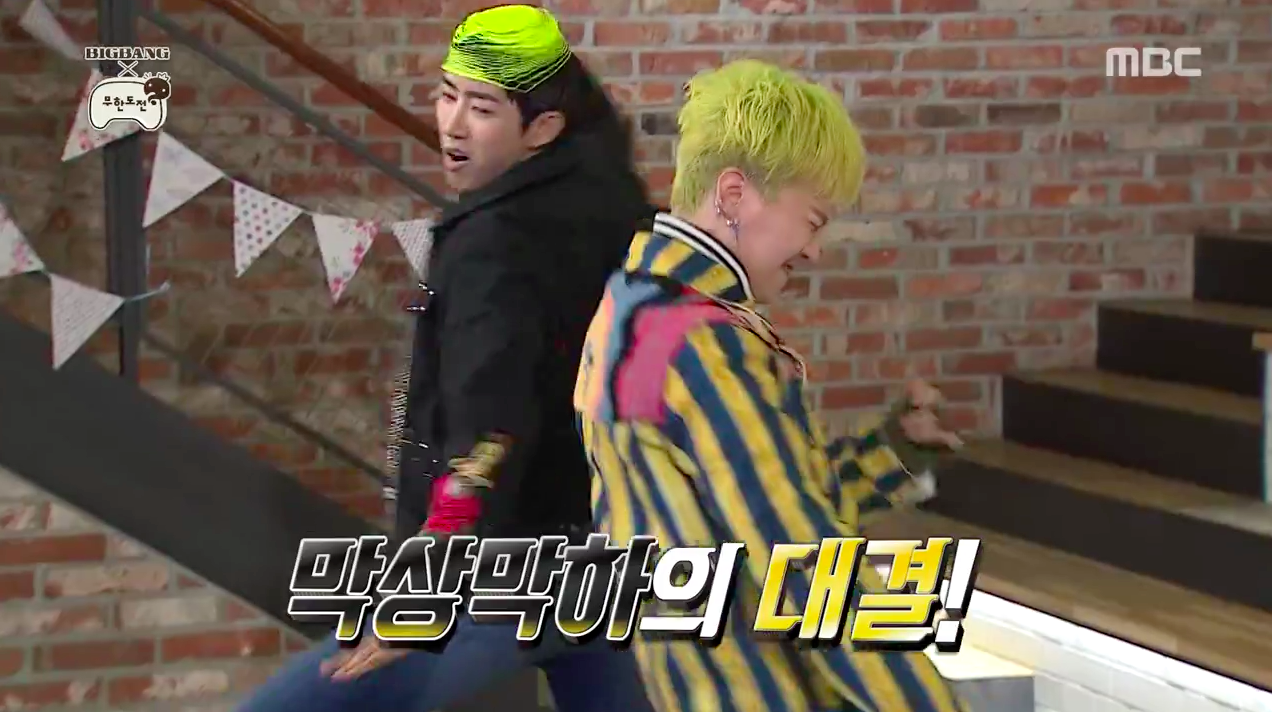 Watch: BIGBANG And Kwanghee Battle It Out In Hilarious Dance-Off On “Infinite Challenge”

On December 17’s episode of “Infinite Challenge,” Kwanghee got to reunite with the guys of BIGBANG!

Kwanghee previously befriended BIGBANG’s Taeyang and G-Dragon when the pair was teamed up with him for “Infinite Challenge”‘s 2015 music festival. Back then, Kwanghee insisted that he was as good as Seungri, which G-Dragon hadn’t agreed with. When Kwanghee and Seungri met on the show this week, it was only natural that the cast would bring this up, which led to a dance battle to see just who was the best.

Kwanghee impressed everyone when he began by dancing to G-Dragon and Taeyang’s “Good Boy.” The performance that Seungri put on next was a bit lacking, leaving even G-Dragon admitting that he was embarrassed by his group mate’s dancing. 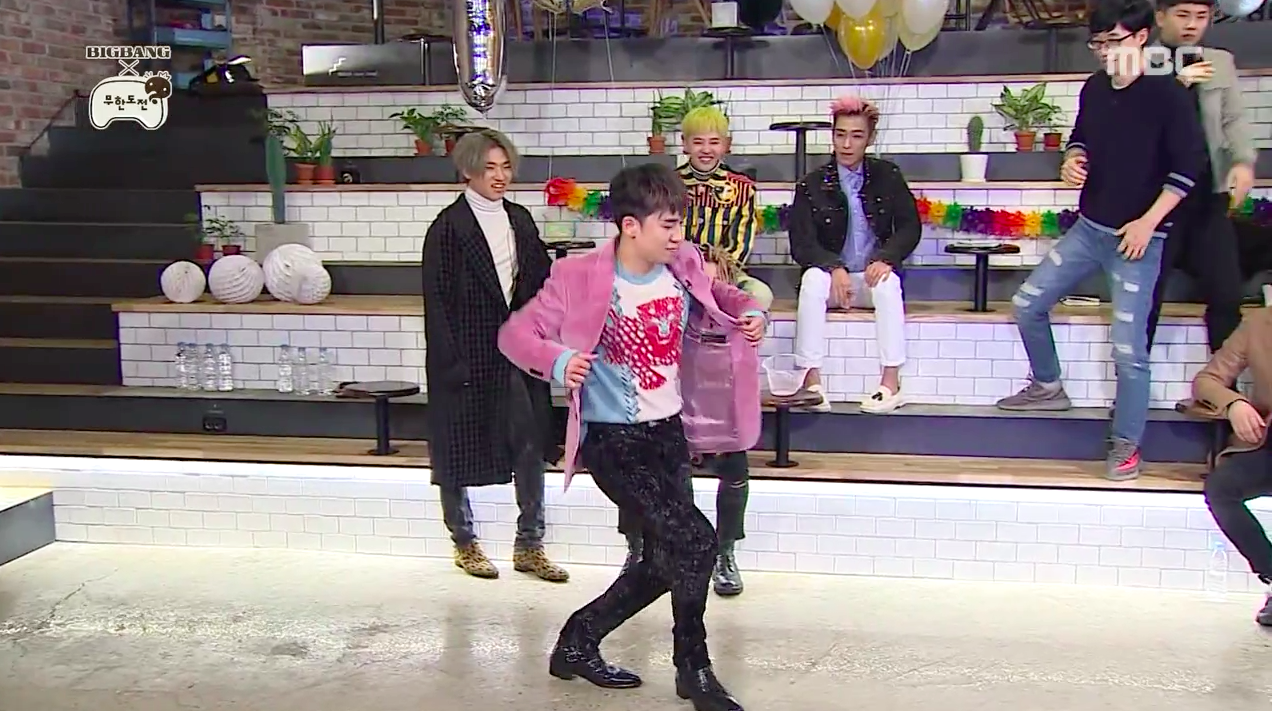 Kwanghee was pronounced the winner of the battle, and he seemed to get so charged up by his victory that he immediately called out Daesung for a battle too.

“I’m not a dancer!” protested Daesung, but he ended up going up against a very passionate Kwanghee in a “BANG BANG BANG” dance-off. Kwanghee knew all the moves to the track but Daesung wasn’t about to let him take the victory easily. He managed to knock Kwanghee to the ground, but admitted at the end that Kwanghee had beat him. 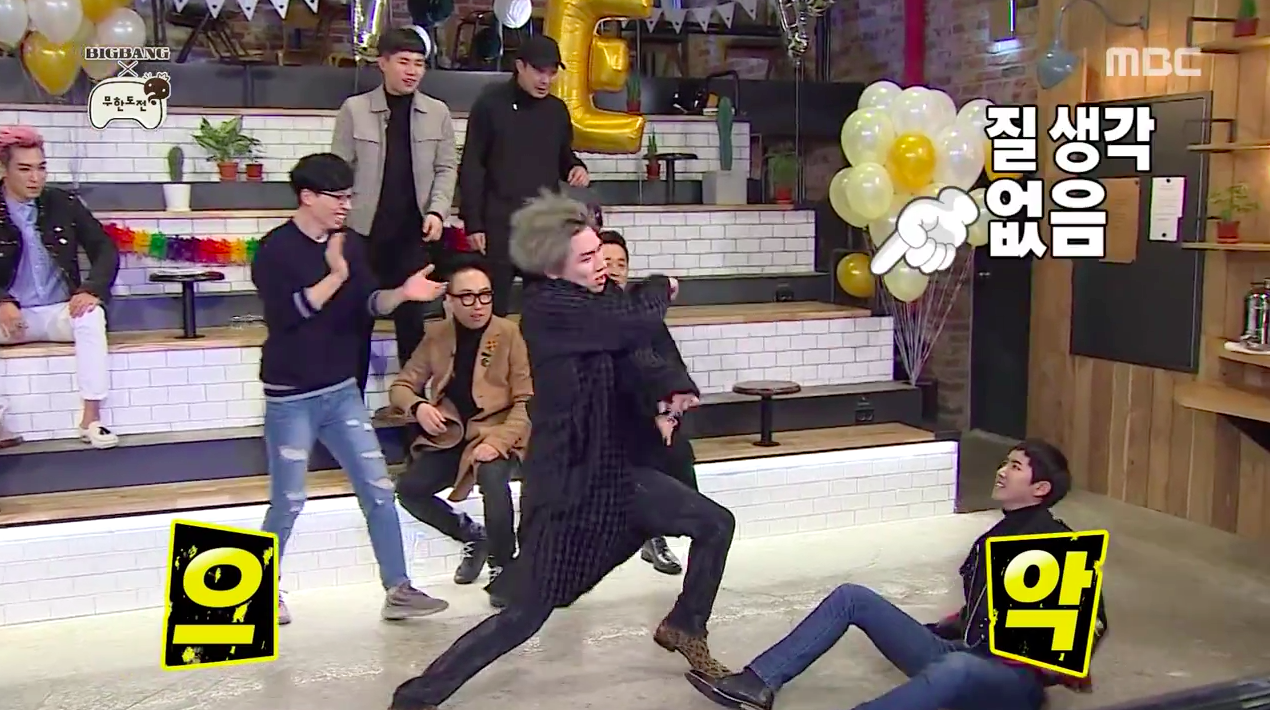 Next up, everyone was impressed by how cool Taeyang looked when he was dancing to “FXXK IT,” and yet Kwanghee’s “praying mantis wave” dance move was enough to win him the third round according to Yoo Jae Suk. 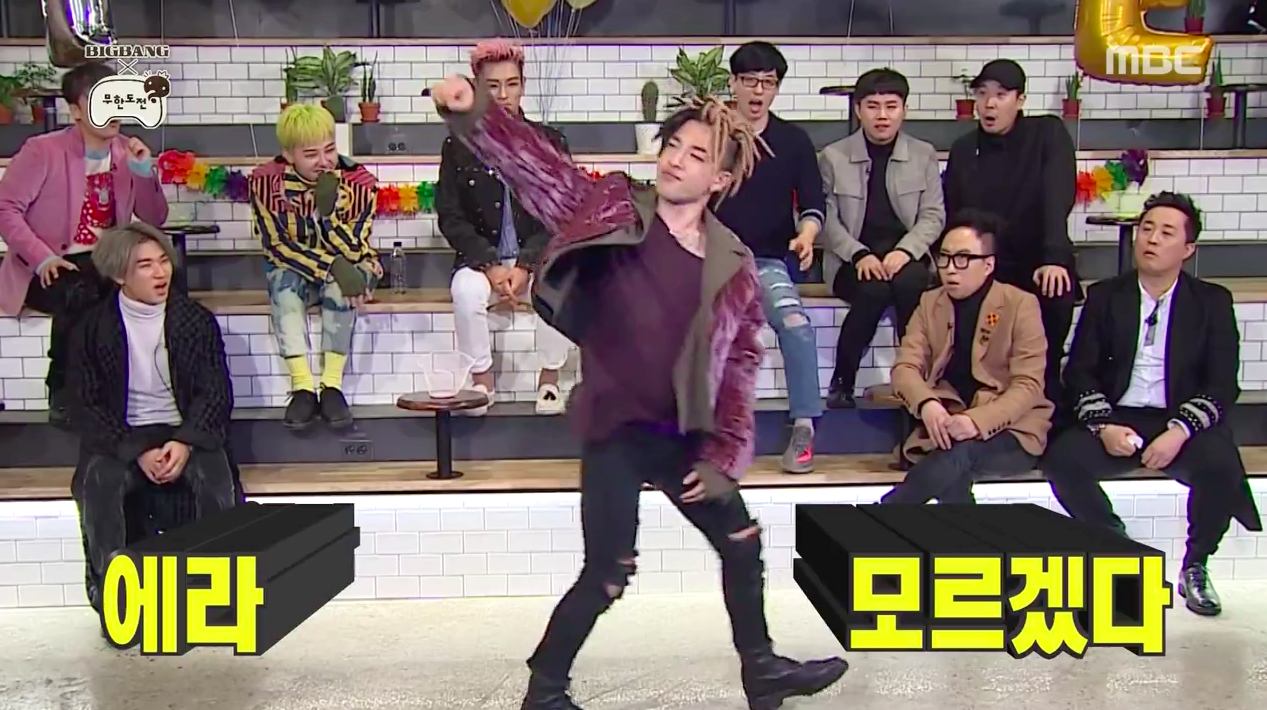 When G-Dragon stepped up for his turn, Kwanghee shocked him by pulling a neon yellow fish net over his head and claiming he looked just like G-Dragon (because of the matching color of his hair). Kwanghee made G-Dragon laugh with his rendition of “Fantastic Baby,” and ended up winning again. 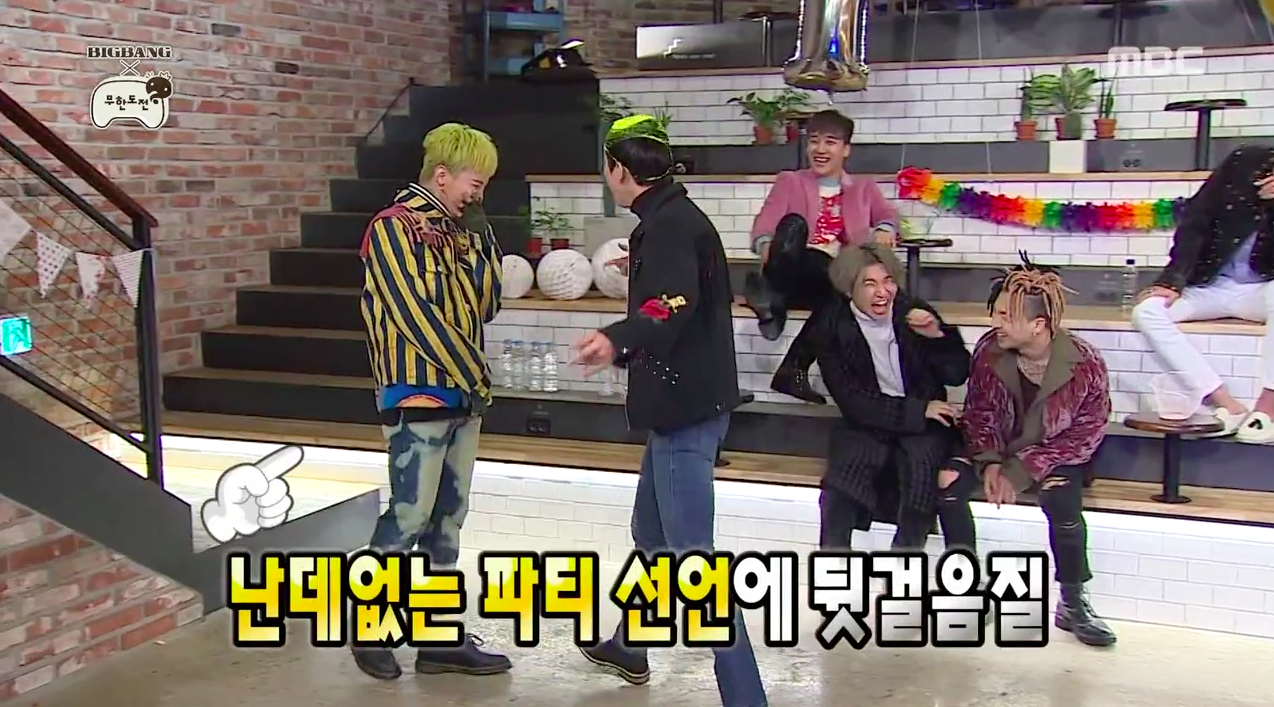 Last up was T.O.P, and Kwanghee had a pink fish net prepared to fit the rapper’s current hair color too. He picked “BAE BAE” as their final challenge song, and looked like he was going crazy as he wildly danced to it. T.O.P’s zombie-like dance attack then freaked out Kwanghee, who yelled, “The look in his eyes is so weird!” as he tried to run away. 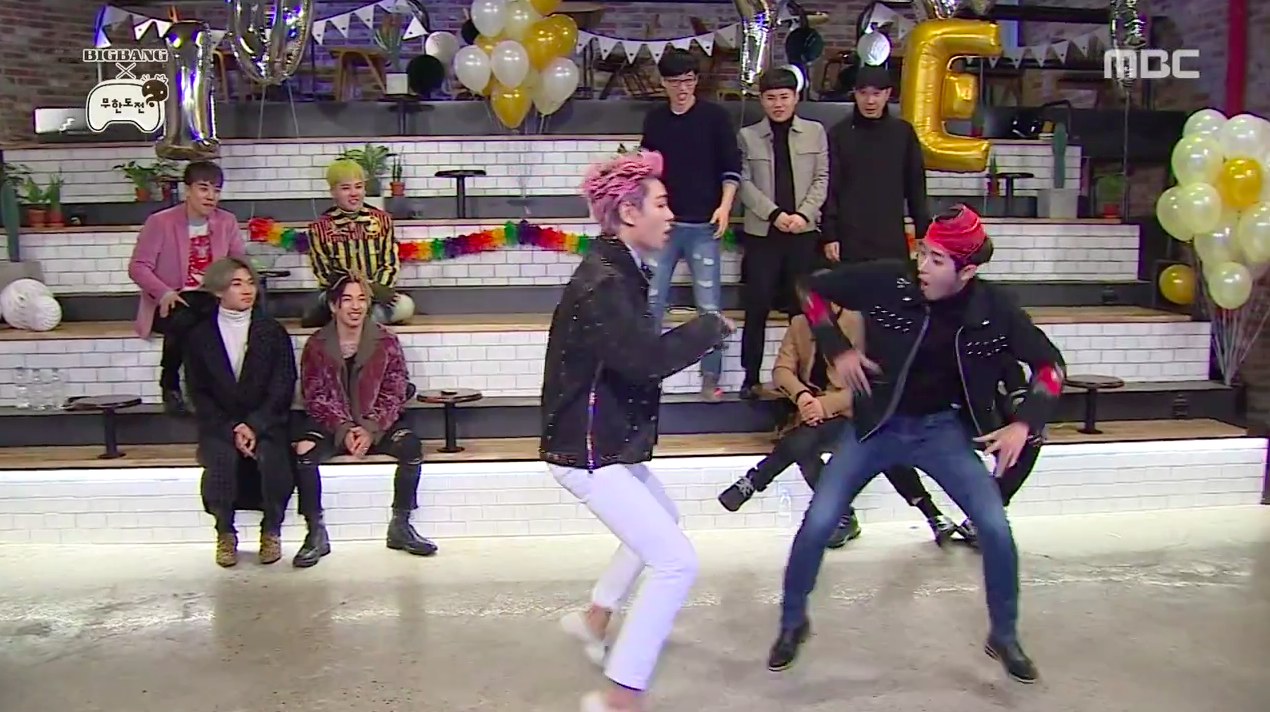 Once the game wrapped up, Seungri tried to explain his lacking performance by saying, “I stopped dancing a long time ago.” Daesung cracked up at this and asked him, “How can you say that like you’re bragging about it?” T.O.P laughed and added, “You’re talking about it like you quit drinking!” 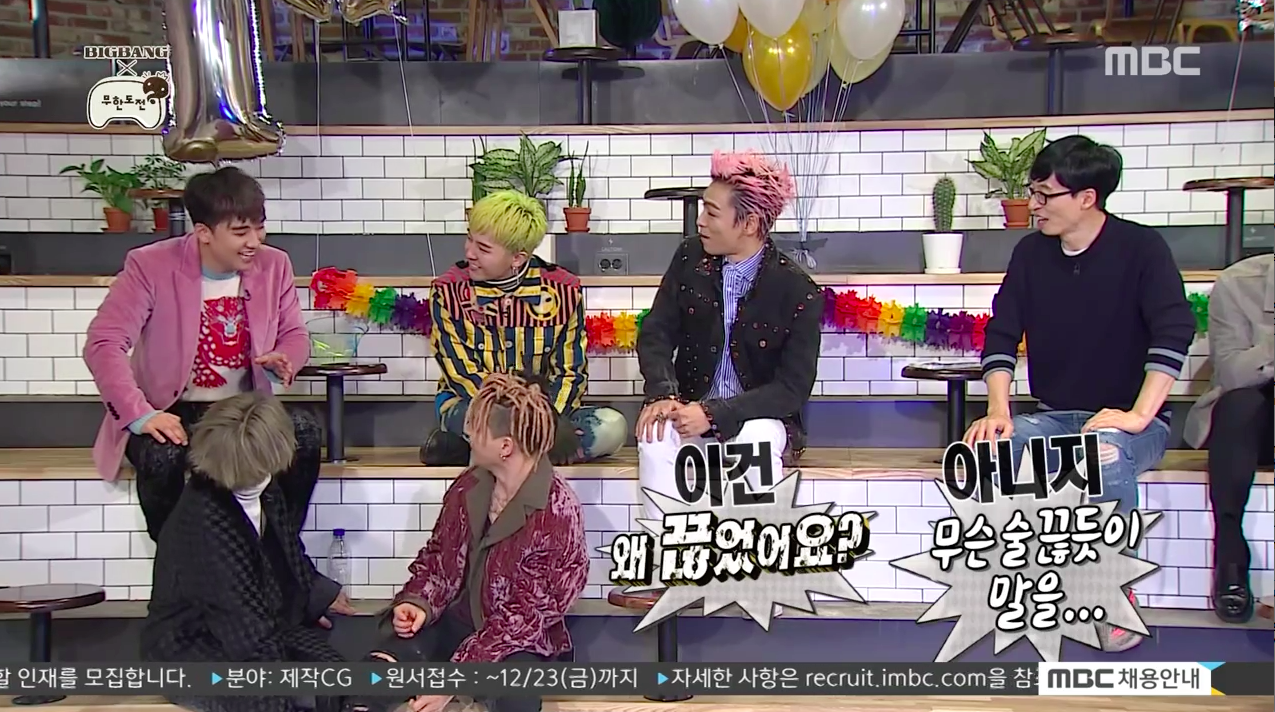 Watch the dance battle below!