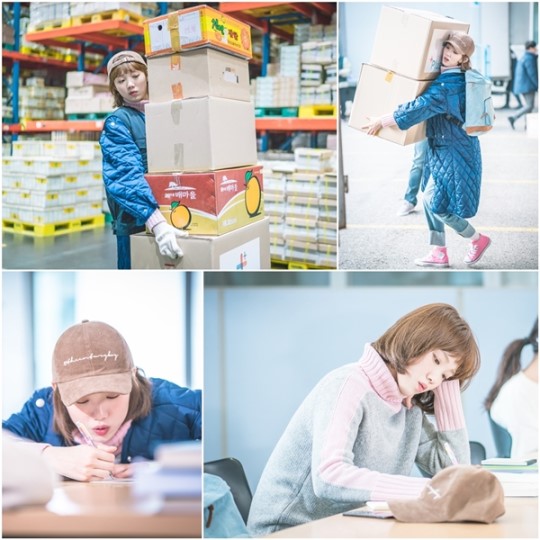 Looks like Lee Sung Kyung is lifting boxes instead of weights for this coming episode of “Weightlifting Fairy Kim Bok Joo.”

In previous episodes, Lee Sung Kyung’s character Kim Bok Joo deals with the pains of getting over her first love. If that’s not enough, her weightlifting coach gets fired and she starts losing the ambition to continue on with weightlifting.

In the preview stills, Lee Sung Kyung is seen carrying boxes in and out of a warehouse. She’s also seen studying diligently in the library. Fans will be able to find out why Kim Bok Joo decided to give the weights some rest in the episode to come.

When they filmed in the library, Lee Sung Kyung looked through all the books on the set and actually looked like she was studying. The staff was not quite used to seeing Kim Bok Joo wearing something other than sweatshirts and sweatpants, but they easily got entranced seeing Lee Sung Kyung’s serious gaze as she looked through the books.

The production company stated, “Lee Sung Kyung will try out a different lifestyle and enter a second stage in her youth. Although she has only known weightlifting her entire life, please look forward to her new take in life full of ups and downs.”

Are you excited to see her try something new?