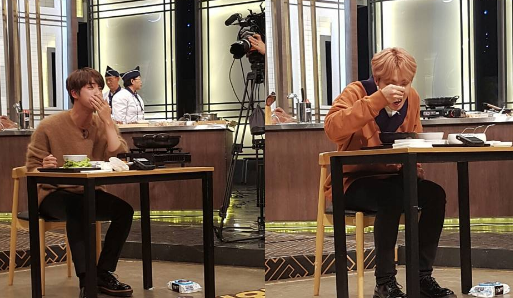 On December 20, the official Instagram for the SBS show shared teaser photos live from the set of their recording that day. The first photo features Jin and J-Hope looking away from the camera and holding a spoon and fork, and the caption explains that they were preparing to head on set.

In the show’s next uploaded photos, J-Hope and Jin are taking turns to wolf down some food during filming. As BTS’s resident cook and the host of his own mukbang (eating show) “Eat Jin,” Jin seems like a natural choice for this concept, while it looks like another great chance for J-Hope to show off his sense of humor and charming personality on a variety show.

“Baek Jong Won’s Three Great Emperors” airs every Saturday on SBS, and the airdate for Jin and J-Hope’s episode has yet to be announced.