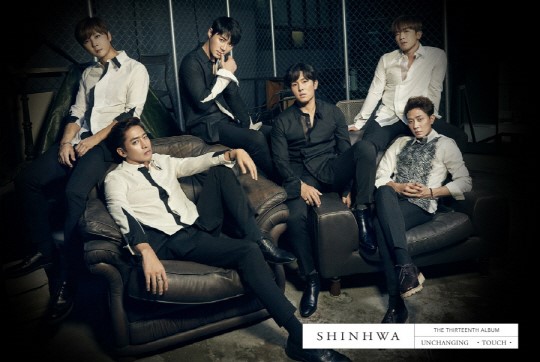 The muted colors and charismatic aura of the new photo are completely different from the warm and soft tones of their November album concept.

The members have already made their mark as a legendary dance group in Korea, with 11 of their 12 past title tracks being dance numbers. It will be interesting to see Shinhwa put out yet another sophisticated and powerful song.

Along with the photo, Shinhwa also released their upcoming album’s tracklist and the name of their title track, “TOUCH.” The group will begin promoting their new song on various broadcasted programs from the second week of January. This is great news for fans who were disappointed by the lack of promotions for the first part of the 13th album.

Shinhwa Company stated, “Shinhwa will be releasing their 13th studio album. PART 1 was a preview and a special gift for the fans who have been waiting for Shinhwa. The full album will include the songs from PART 1, and Shinhwa has done their best to put their all into the new album. Please keep an eye out for the upcoming project as we’ve worked hard to bring you the best album possible.”

Ahead of the release of “13TH UNCHANGING – TOUCH” on January 2, Shinhwa will appear at the 2016 KBS Gayo Daejun on December 29.