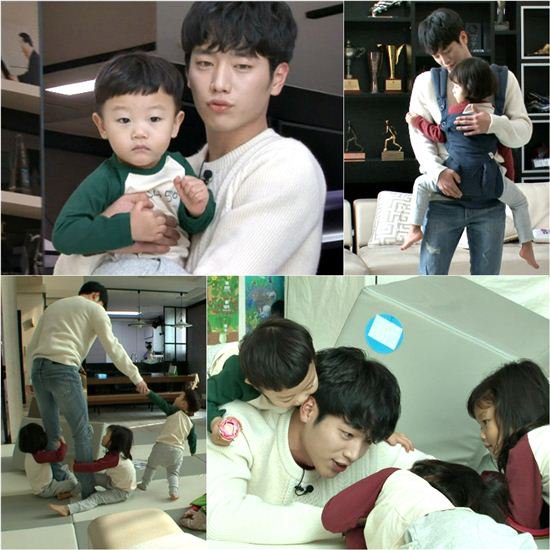 A new not-uncle will be visiting Daebak, Seol Ah, and Soo Ah this Christmas!

On the upcoming episode of “The Return of Superman,” Seo Kang Joon will be a babysitter for the three little Lee children, of whom he confesses he is a fan. As expected, the twins fall in love with the handsome actor the moment they lay eyes on him.

The new babysitter also introduces himself as an older brother (oppa), rather than an uncle (samchon), as he felt that the latter sounds too distant age-wise, and the former would let him get closer to the children. It’s a sound reason, but it also becomes fodder for laughter when the ever-adorable Daebak starts calling Seo Kang Joon oppa, as opposed to the hyung term used by males.

Stills for the episode have been released, giving viewers a glimpse of how Seo Kang Joon’s babysitting experience will go. An optimistic shot shows Seo Kang Joon rocking Seol Ah to sleep in a baby carrier, while another less optimistic but still very cute one shows the poor man unable to move even a step from all the children dangling off his limbs. But even though he’s sweating buckets, the actor’s smile never disappears.

The episode will be aired on December 25, but in the meantime, you can watch the siblings master swimming and celebrate their father’s Asia Champions League win in a surprise event in the latest episode below!

Seo Kang Joon
Soo Ah
The Return of Superman
Daebak
Seol Ah
How does this article make you feel?