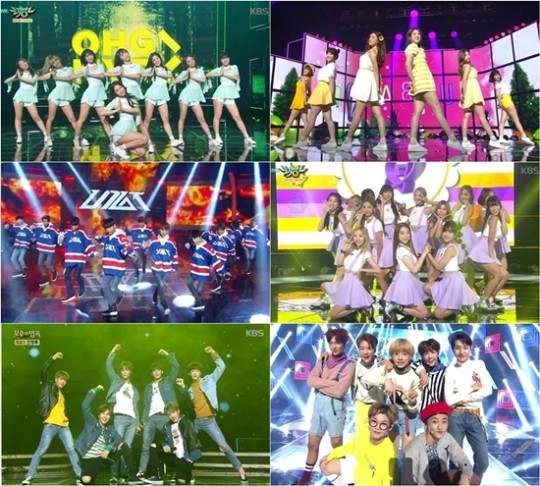 KBS has huge plans for this year’s Song Festival, literally.

The event organizers recently announced that the anticipated “rising stars” of 2017 -Oh My Girl, LABOUM, UP10TION, Cosmic Girls, ASTRO, and NCT- will be performing in a giant combined stage for the music festival on December 29.

Oh My Girl debuted in 2015, and garnered a lot of interest this summer with “A-ing,” a refreshing remake of 1st generation girl group Papaya’s “Listen To Me.” LABOUM, who debuted in 2014, has also been gathering popularity in various areas. For one, Solbin has been drawing attention with her MC role on “Music Bank,” and her uncanny similarity to Hyeri of Girl’s Day. Meanwhile, UP10TION, another group that debuted in 2015, has been enjoying a white-hot response to their recent comeback song, the powerful and explosive “White Knight.”

The remaining three groups may have debuted a year later, but they’re certainly holding their own. Cosmic Girls’ Cheng Xiao recently received a great amount of interest, and the addition of I.O.I’s Yoo Yeonjung in July also attracted a lot of positive attention for the group. It’s also been a successful year for ASTRO, with a solo concert and an overseas showcase less than a year since their debut. And finally, NCT Dream is currently contending for the title of “Korea’s Little Brothers” with their cute and lively charms.

With these 50 young and passion-filled upcoming idol stars, the stage is set for a fresh and exciting performance with a little romance thrown in, promising to rival the movie “Step Up” and the musical drama “Glee.”

Keep your eyes peeled for this impressive collaboration stage during the 220 minute-long music festival! So far, the first and second lineup has also been revealed.