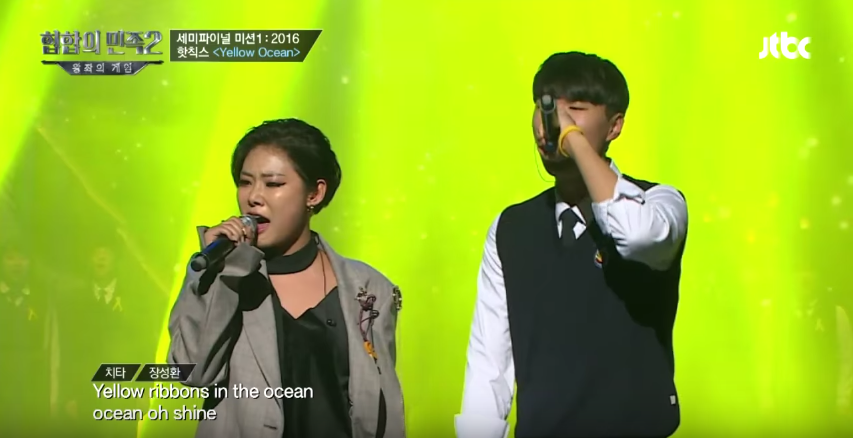 On the December 27 episode of JTBC’s “Nation of Hip Hop,” Cheetah and high school student Jang Sung Hwan for the competition’s semi finals.

The duo chose the 2014 Sewol Ferry tragedy, where 304 people of 476 passengers lost their lives when the South Korean ferry sank due to several reasons like poor management by the company. Most of the deceased were students from Danwon high school.

The disaster brought many questions to light, most of which is still unanswered today, but many people are slowly becoming ambivalent about the continued lack of response from the government.

Cheetah and Jang Sung Hwan’s performance of “Yellow Ocean” started off with clips of news broadcasts and parents crying out for their children lost at sea. It also included a snippet of Lucid Fall’s “Still There, Still Here,” a song that many interpret to be an homage to the victims and their families.

Basked in a yellow light, Cheetah tearfully rapped about the helplessness people felt at being unable to do anything, and mourned for all those who lost their lives. Jang Sung Hwan kicked off the second verse with a single question, “Is no one out there?,” and reflected on the tragedy from the perspective of who he was, a high school student. Asking for forgiveness, they promised to “remember April 16” and that the truth will eventually prevail.

The audience understandably broke out into tears, and the other contestants commented that they respected Cheetah and Jang Sung Hwan for addressing this difficult topic.

Cheetah revealed that it was a song she’s wanted to make for a long time, but wished to first be at a place where more people would listen. The duo talked about how they personally went to and asked for permission from deceased’s parents, who were also in the audience.

They emphasized that the point was “not to make people sad, but to remind people to not forget,” and that people should always “remember [this tragedy] in their hearts, instead of forgetting as time goes on.”

Sewol
Cheetah
Nation of Hip Hop
How does this article make you feel?