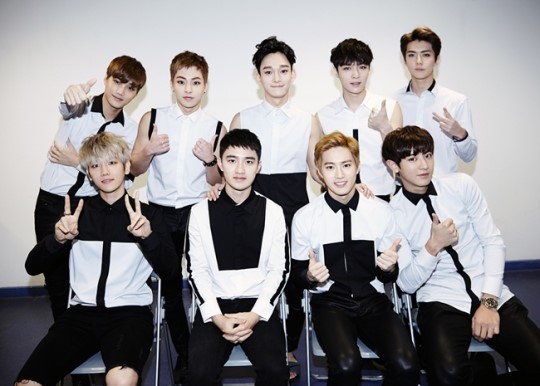 EXO is already known as a “triple million seller” for selling over a million records of each of the group’s three studio albums. They have been winning awards at various end-of-the-year awards ceremonies since 2013, having won the “Album of the Year Award” at the Mnet Asia Music Awards for four consecutive years. With this new feat in album sales, EXO has proven yet again of their popularity and power in the K-pop industry.

EXO’s third concert tour “EXO PLANET #3 – The EXO’rDIUM” broke records for becoming the first to hold six straight performances at the Gymnastics Stadium for a single project in Seoul. They also held their 100th concert on December 11 at the Kyocera Dome in Japan.

The members of EXO have also been branching out musically, participating in collaborations like Baekhyun and Suzy‘s “Dream,” EXO and Yoo Jae Suk‘s “Dancing King” for MBC’s “Infinite Challenge,” and SM producer Yoo Young Jin and D.O.’s “Tell Me (What Is Love).” They’ve also been working on well-received OSTs, with Chen and Punch’s “Descendants of the Sun” OST “Everytime,” Chen, Baekhyun, and Xiumin’s “Scarlet Heart: Goryeo” OST “For You,” and Chanyeol and Punch’s “Goblin” OST “Stay With Me.”

Some of the members of EXO took on acting gigs this year, proving their acting chops through various productions. Do Kyung Soo (D.O.) worked on the movie “My Annoying Brother,” and the web drama “Be Positive,” while Lay participated in “To Be a Better Man” and “The Mystic Nine.”

With EXO successfully firing at all cylinders, it will be interesting to see what they have in store for us in 2017, both as a group and as individuals.