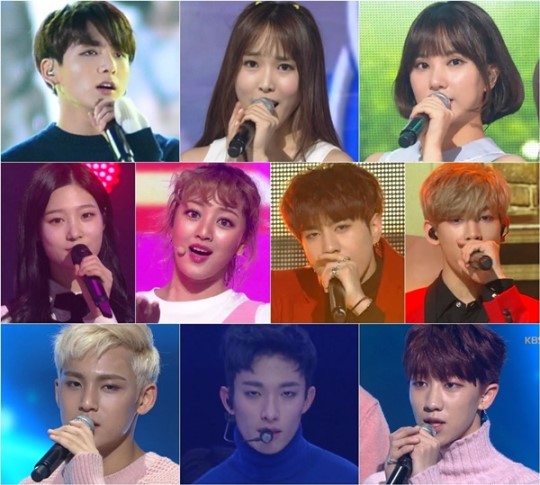 KBS announced that the event will feature a special collaboration from BTS’s Jungkook, GFRIEND’s Yuju and Eunha, I.O.I’s Jung Chaeyeon, TWICE’s Jihyo, GOT7’s Yugyeom and BamBam, and SEVENTEEN’s Mingyu, Dokyeom, and The 8.

All 10 of these idols excelled this year, and they are set to bring a youthful energy to the stage. As members of the “’97 Line” and soon to turn 20, the age that is said to represent “youth,” the group hopes to send the youth of Korea a message of hope.

It is also being said that some of the members of SEVENTEEN are rehearsing to be the backup band for the “97 Line” to show support for fellow members Mingyu, Dokyeom, and the 8.

Sources from the 2016 KBS Song Festival stated, “There is a harmonious and unified atmosphere amongst the ten idols preparing for their stage together. The performance will give each member an opportunity to shine. Please keep an eye out for it.”