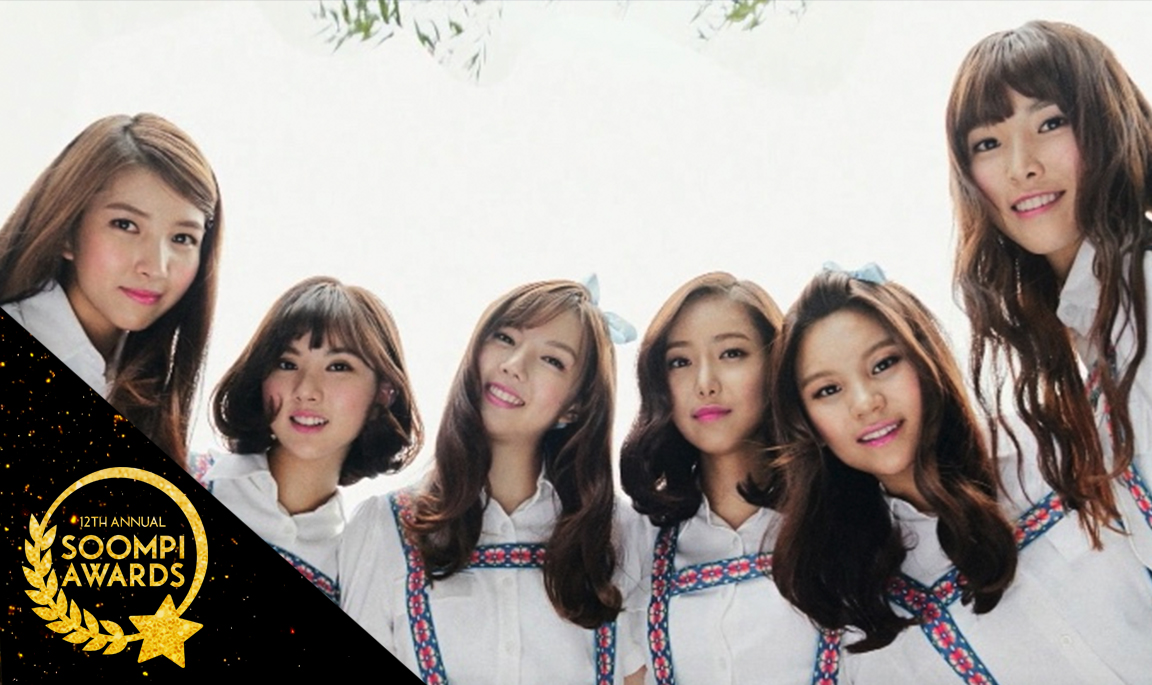 Some songs are so great, you put them on repeat for days. These songs were so great, they topped Soompi’s charts for weeks.

Here are the nominees for the 12th Annual Soompi Awards:

TWICE is a force to be reckoned with. Despite being just one year old, the group has smashed many records set by previous idols. “CHEER UP” topped the Music Bank K-charts in May, 2016. Its accompanying music video reached over 100 million views on YouTube. If TWICE keeps this up, they may very well take the throne. Oh la la.

Wonder Girls are truly legends of K-pop. Having been in the industry for over 10 years, they’ve proven their staying power no golden trophy could measure. Adding Yubin to the band is the best decision JYP has ever made. At the mention of Wonder Girls, “Nobody” rings in my ears. As one fan put it:

Wonder Girls be like, “What genre haven’t we explored yet?”

Fans be like, “What genre haven’t you slayed yet?”

The song is catchy. And the music video is dope. If the world thinks only Taylor Swift or Beyonce can make the best music videos, then they haven’t seen K-pop. Despite being the new kids on the block (they just debuted in August), BLACKPINK are the ones to watch. Even if K-pop fans hadn’t even heard of the group, they were converted within a minute of hearing this song.

A summery song released this summer by GFRIEND after their schoolgirl trilogy. Here they tried to do something different while maintaining their signature light and upbeat dance sound. Intense instrumentals and modernized J-pop were clearly added to the mix. Give it a try and you might find yourself hitting repeat non-stop.

Talk about vocals. Talk about sass. Talk about MAMAMOO. They remind me of why I fell in love with K-pop and K-dramas 15 years ago, since the days of “My Sassy Girl.”

SISTAR returned this June with another addictive summer hit. Turning away from bubblegum, “I Like That” is a sexy, sultry song about a woman who’s in love with a man who can’t stay loyal to her. Simultaneously vulnerable and empowered, SISTAR belts out mournful solos with an equally catchy chorus. In the end, the woman throws in the towel (or skirt), ending the torturous relationship.

This 80s arcade-feel synthpop song debuted at No. 2 on World Digital Songs, and became the most viewed K-pop music for the month of September in America. Yet the sugary look and feel disguise killer intentions; the lyrics compare the process of winning someone’s heart with a game of Russian roulette.

Their name is EXO. Their game is chart-topping success. EXO’s “Monster” peaked at No. 1 on the Billboard World Digital Songs chart, and No. 1 on the Gaon weekly digital chart. “Monster” went on to win first place nine times on South Korean weekly music shows.

What else did you expect? It is EXO. Nuff said.

Known for their big, ballsy hooks, EXID’s new single L.I.E. lured us in with a sensual, sultry opening. A great mashup of the classic and electronic genres, L.I.E. played to each group member’s strength, culminating in a particularly strong chorus.

I’ve loved Taeyeon since her performance in “The Boys.” Her second solo EP “Why” debuted at No. 1 on the South Korean Gaon weekly album chart, and her unquestionable vocal prowess was demonstrated yet again in this new single.

Out of the few boy bands who have made it to this impressive list dominated by girl groups, BEAST’s “Ribbon” is beautiful track for easy listening. A bit underrated in my opinion, they haven’t received the attention they deserve. What to do? BEAUTIES to the rescue!

Block B’s “Toy” is a deep and sensitive number. The lyrics are beautiful. It captures the sentiment of vulnerability and surrender one is so achingly capable of reaching when in love. At the end, we just want to shake him and say, boy, you don’t want to be nobody’s toy, go find your equal.

Light and ethereal, Apink’s title track “Only One” from their latest studio album stays true to their signature style. This is not the typical high-energy girl group music that hits your senses with a pow. It grows on you subtly.

“Blood Sweat & Tears” has taken BTS to new heights. Solid choreography, solid cinematography. The musical complexity comes from the layering of multiple elements: gentle chimes, claps, and echoing sirens. The accompanying MV is a haunting exploration of fate, life, death and falling from grace. It’s absolutely dazzling and invites one to savor over and over again.

The 12th Annual Soompi Awards is sponsored by Spottoon, a premium comics library, and is held in partnership with American network Fuse and Korea’s top production house ZANYBROS.

michelledong is a Soompi Features Writer. When she’s not straining her neck muscles to find The Next Great Korean Drama, she’s writing her book 2 Questions Every Girl is Asking Herself and casting Kim Soo Hyun as the dream lead.