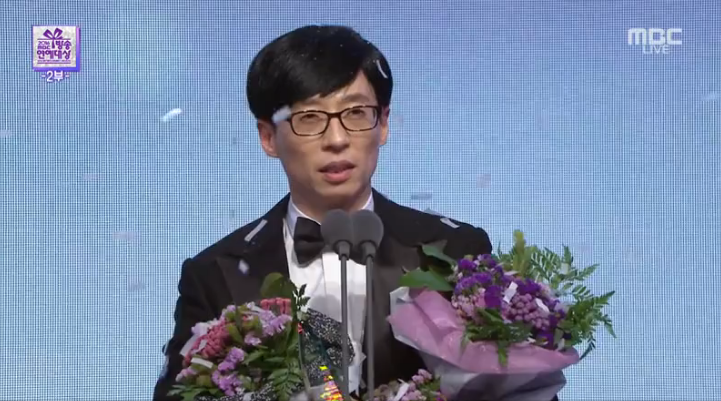 On December 29, Yoo Jae Suk was recognized for his work in the entertainment industry at the 2016 MBC Entertainment Awards, where he was given the Grand Prize – the night’s biggest award. It was Yoo Jae Suk’s first Grand Prize of the year, and his thirteenth Grand Prize from one of the big three networks (MBC, SBS, and KBS) in his career.

When he accepted the award, Yoo Jae Suk first expressed his sincere gratitude but then added, “The more awards I receive, the more sorry I feel.”

He addressed his fellow nominees by saying, “To Jung Joon Ha, thank you so much and I’m so sorry. And to Kim Gura and Kim Sung Joo, I want to express my thanks.”

Yoo Jae Suk also thanked his family, including his wife and son, and the hard-working staff of “Infinite Challenge.” He then mentioned Jung Hyung Don’s departure from the show, and commented, “No matter where it is, I hope that Jung Hyung Don will be happily doing what he wants on television. I’m not sure when it will be, but I hope that one day we can do ‘Infinite Challenge’ together with Noh Hong Chul and Gil too, when the viewers allow it.”

“In addition, Park Myung Soo and Jung Joon Ha, you worked so hard again this year,” Yoo Jae Suk went on to say. “Thank you to Haha, who always acts as a pillar of support in between the older and younger members, to Yang Se Hyung who came in and has been a huge support during such a difficult time for us, and to Kwanghee who had quite a hard time adjusting but is now making everyone laugh a lot.”

Lastly, Yoo Jae Suk expressed his hopes for South Korea in his speech, saying that he’s recently come to realize once again that the owners of a nation are its citizens. “People use the term ‘the flower path’ a lot nowadays,” he said. “Rather than having only a minority of our citizens walking the ‘flower path,’ I hope that next year will be a year when all of our citizens will be walking on it.”