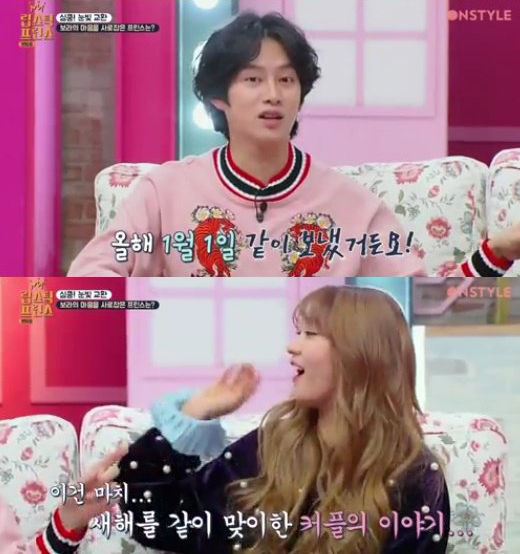 SISTAR’s Bora was the princess for January 29’s episode of OnStyle’s “Lipstick Prince.” Before she was revealed, the panel had to guess who the princess hidden behind the blind was.

MONSTA X’s Shownu guessed it was someone from SISTAR, and the main host, Super Junior’s Kim Heechul, jokingly replied, “If it’s SISTAR, I’m going home. I’m too close with them.”

He continued by asking the princess, “Just wondering, have you ever been to my house?”

The princess responded with a “Yes, I have,” which prompted Block B’s P.O. to ask Kim Heechul, “Why did you take her there?”

After revealing herself as the princess, Bora was asked by Kim Heechul to explain why she went to his house.

Bora playfully scolded him by asking him, “Why did you even bring that up?”

Kim Heechul continued the playful banter by confessing, “We spent New Years’ Day together,” causing initial surprise from everyone.

Tony Ahn went on to ask Kim Heechul how long they’ve been dating. Bora cleared the air by explaining, “Everyone, don’t misunderstand! I went there to shoot for a show.”

Right from the get-go, viewers could tell just how close Kim Heechul and Bora are!

“Lipstick Prince” airs every Thursday at 9 p.m. KST on OnStyle. Don’t miss out!