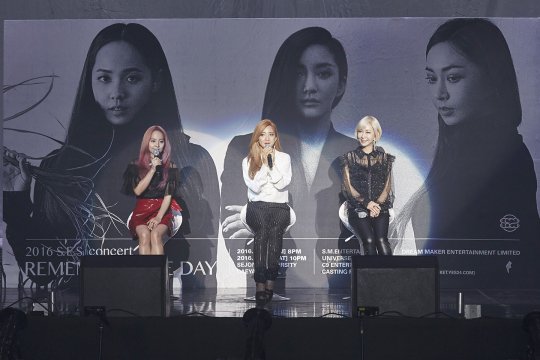 S.E.S teared up while thanking Lee Soo Man and the other staff of SM Entertainment.

On December 30, the “original fairy girl group” held their solo concert “Remember, The Day” at Sejong University in Seoul. It is their first solo concert in 16 years – their last was in 2000, two years before their official disbandment (some sites put the date at 2003).

At the pre-concert press conference, the ladies expressed their gratitude to Lee Soo Man, saying, “We’ve been holding a UNICEF bazaar for eight years, and this time we approached Lee Soo Man, saying we wanted to hold a concert. He readily gave his approval, and even became the producer for our album.”

They continued, “Teacher Lee Soo Man bought us a delicious meal, and we chatted for five hours. He’s really busy so we were worried that he wouldn’t have time for us, but he gave his attention to every part of the album, and we’re very grateful for that.”

As Bada thanked Lee Soo Man and the SM staff for their concern and sincerity, tears filled her eyes.

“Remember, The Day” is held over two nights, ending on December 31. The second concert will be broadcast live through various mobile video applications like oksusu, IPTV, and Btv, starting from 11:30 p.m. KST on the day itself.