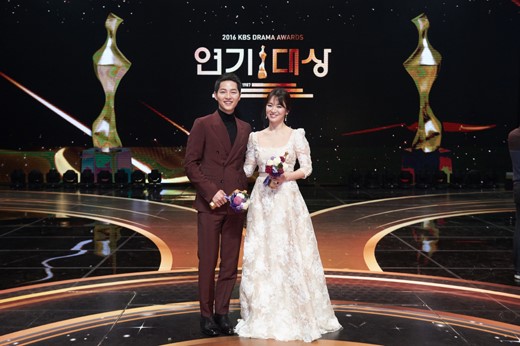 The 2016 KBS Drama Awards was the king of viewership ratings amongst the year’s end-of-the-year awards shows.

According to statistics released by Nielsen Korea, the first act of the 2016 KBS Drama Awards scored nationwide ratings of 15.2 percent. The second act also came in at 14.8 percent, making the event the most watched end-of-the-year awards show in 2016.

The highlight of the night was when Song Joong Ki and Song Hye Kyo both accepted the Grand Prize Award for their roles in “Descendants of the Sun.”

In the same time slot, the 2016 SAF SBS Drama Awards had viewership ratings of 7.2 and 6.4 percent for its first and second act respectively. The winner of the Grand Prize Award was Han Suk Kyu, for his role in “Romantic Doctor Kim.”

Which event did you watch? Share with us your favorite moment of the night!