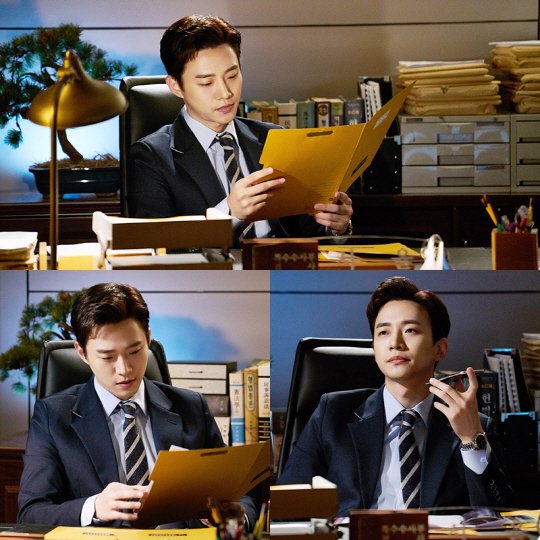 Junho will be playing Seo Yul, a successful prosecutor who gets scouted into the finance board of TQ Group. His character is very keen and charismatic, which will heighten the tension within the drama.

In the photos, Junho shows that he’s in perfect sync with his character. This scene is when he’s observing various files in the prosecutor’s office. His ice cold gaze and charisma captivates the viewers for sure.

His hairstyle and outfit also add to the fact that Junho has melted into his character. Fans are getting more and more excited on how he’ll carry out his role in “Chief Kim,” which is his first mainstream drama.

This scene was filmed on December 28 at a set created in Gyeonggi-do. As soon as Junho arrived on set, he sat behind the desk and focused on getting ready to film. He rehearsed sincerely, paying attention to his lines and props. When the actual filming began, his strong gaze made the staff compliment his talent.

Junho relayed, “I wanted to try playing a different character like ‘Seo Yul’ since I’ve never played one like him before. This is a huge challenge for me so I’m planning to try different things and just go with it. Please watch us with love.” He added, “‘Chief Kim’ is a drama that people today can relate to.”

Production company Logos Film stated, “Junho’s character Seo Yul is a talented prosecutor who later gets scouted into the finance board of TQ Group. Junho’s efforts to become one with his character will surely show through in this drama. Please look forward to Junho’s acting.”

Meanwhile, “Chief Kim” is an office comedy about a genius chief accountant Kim Sung Ryong (Namgoong Min) who gets accepted into TQ Group and tries to save the company from failure. It will air on January 25 at 10 p.m. KST.

Are you excited to see Junho in this drama?