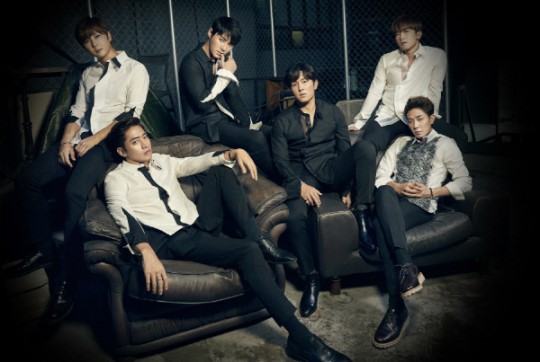 Shinhwa Talks About How They Feel Seeing Their Longtime Fans Now

On January 2, veteran idol group Shinhwa made their first comeback in more than a year with their 13th studio album “Unchanging – Touch.”

This year Shinhwa will celebrate the 19th year since their debut. Without disbanding or losing a member, Shinhwa has been going strong since 1998. The members have also established solo careers in that time.

In a recent interview, Shinhwa talked about their new album and how they feel about seeing their longtime fans grow up and change with them.

In November, Shinhwa announced their comeback with “Unchanging Part 1 – Orange.” The new “Touch” is the start of official promotions and includes a track of the same name in the future bass genre.

“It’s a genre created by foreign DJs,” Lee Min Woo said. “We wanted to try something new, but it was a genre we’d never done before. During the recording, we were half-anticipatory, half-worried. But when we heard the result, we were satisfied.”

Jun Jin said about the choreography, “In the past we did powerful moves with perfectly synchronized choreography. But this time we went with a ‘restrained’ concept. Our youthful days have passed behind us and we wanted to show a sincerity with relaxed, restrained movements. Every member has different moves to showcase.”

In 2017, Shinhwa will be embarking on a tour (“2017 Shinhwa Live Concert Unchanging”) to greet their fans. They will begin on February 4 in Taiwan and tour all around Asia, including stops in Busan and Daegu in Korea.

“When we step out onto the concert stage and see the orange lightsticks, I feel excited and get goosebumps at the same time,” Eric said. “The reason is probably because everyone is cheering us on without changing. The fans that were once young girls are now someone’s wife or mother. I think of how we spent our twenties together and I feel choked up.”