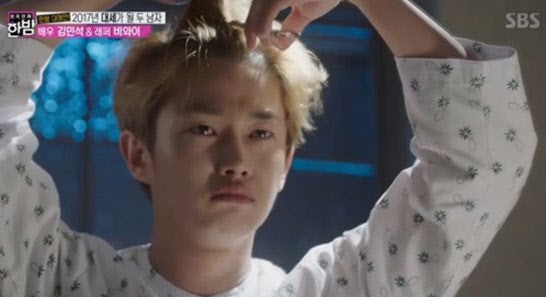 The actor previously expressed through his agency Woollim Entertainment that he didn’t have many worries about shaving his head, and also mentioned that he had “debated a little bit,” but in a recent interview, he admitted that it wasn’t quite that easy.

On the January 3 episode of SBS’s “Night of Real Entertainment,” the actor said, “Reporters have asked, ‘Did I not worry even once?’ Honestly, how could I not have worried? But the more I worried, I got angry at myself.”

He continued, “I thought to myself, ‘It’s a ridiculous worry that I’m having. If it helps the production, then I should go for it. What [else am I] thinking about?'” 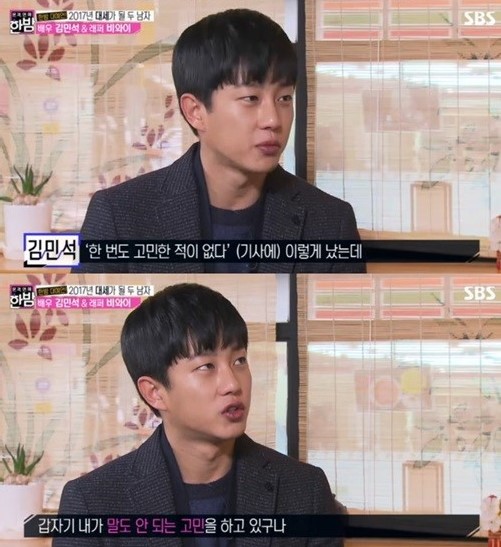 Kim Min Suk also talked about his first impressions of his “Descendants of the Sun” co-star Song Joong Ki. He revealed, “When I lived in Busan, I really thought I was handsome. But when I saw Song Joong Ki, I thought to myself, ‘Wow.’ Anyone else I saw, I also thought they were really handsome.”

The up-and-coming actor recently received the New Star Award at the 2016 SAF SBS Drama Awards, where he thanked his grandmother for taking care of him during his speech.

He explained during this interview that she may have been his grandmother in name, but she was also his best friend, lover, and mother. When he called her during the show, Kim Min Suk revealed that he had saved her contact name as “Hal-Mang-Gu” (an adorable way of saying “grandmother” in Korean).

The 10 minute-long phone call was also the sweetest part of the day’s filming, as Kim Min Suk poured out all his cute acts (aegyo) to his grandmother, and even used pet names with her.

Doctors
Kim Min Seok
E-news Exclusive
How does this article make you feel?